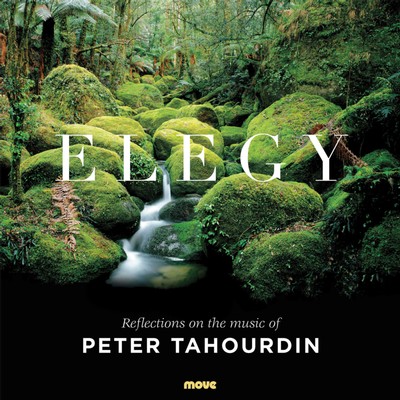 The works on this CD spans nearly a half a century of his creative activity in the field of chamber and electronic music.

Elegy was launched on 11 March 2017. Julia Tahourdin, Peter’s eldest daughter, opened the proceedings. Firstly, she thanked everyone for coming to this launch. Although not a deeply religious man, Julia said that she was sure that Peter is with us here in spirit – he would certainly appreciate the way we are celebrating his music this Saturday afternoon.

Elegy is the title track of this CD. Julia’s dog, Giles, died in March 2005. He was her soul mate and she held a celebration of his life on Good Friday that year at Yarra Bend Park in Fairfield. Peter asked if he could say a few words. He said that he had just finished a composition called, Elegy, which he had decided to dedicate to Giles. In his programme notes to that piece he wrote, “Giles was a dog – large and lovable – a loyal and faithful companion to my eldest daughter; he died of old age and a consequent decrepitude only days before the completion of this work. Perhaps the dedication to him then is fitting. In his youth Giles had an engaging vitality and playfulness, but he was always a gentle creature. Maybe we humans have something to learn from an animal like Giles?”

The sixth piece, Music for Solo Flutes, was the last public performance of one of his works that Peter and Julia attended. The concert was organised by the Melbourne Composers League and held in April 2009 at a lovely church in Brighton.

You may wonder why William Shakespeare’s Sonnet 11 appears on the back cover of the CD? Peter died in his own home in late July 2009, he was looking forward to going on a cruise the following week. His health seemed to rapidly deteriorate when his long-term friend, Tim, from Bramdean died in May that year. Peter had planned to set some of Shakespeare’s sonnets to music in Tim’s memory when he returned from the cruise.

Barry Conyngham, Dean of the Faculty of the Victorian College of the Arts and the Melbourne Conservatorium of Music launched the CD. Barry was an esteemed colleague of my father’s. As well as both having a love of teaching and composition, they also shared the same birthday.

The National Library of Australia under the guidance of Robyn Holmes has collected the archives of almost all the nationally significant composers. It includes a full on-line guide to the papers of Peter Tahourdin. Robyn Holmes is Senior Curator at the National Library of Australia (NLA), and formerly Curator of Music and Head of the Music and Dance Branch. As a scholar, her research has predominantly been in Australian music, both historical and contemporary. She was elected a Fellow of the Academy of the Humanities in 2010, recognising her major role in developing research infrastructure for Australian music including the development of the online service Music Australia, now integrated into the National Library's Trove. She has held positions as the Deputy Chair of the Music Council of Australia, Secretary of the Musicological Society of Australia and President of the International Association of Music Libraries and Archives.

Elegy: Reflections on the music of Peter Tahourdin is available for download from the iTunes Music Store.
It's available for streaming through Apple Music.

Elegy: Reflections on the music of Peter Tahourdin is available as as CD. It can be purchased online through Buywell Music or the Australian Music Centre which both offer secure online ordering.