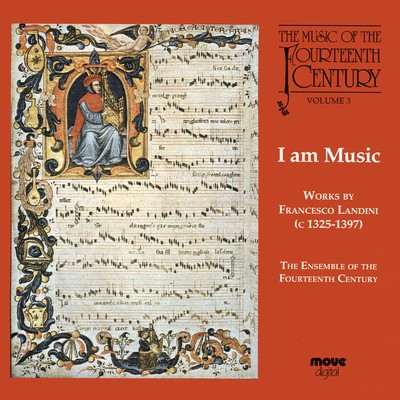 Landini was a poet, polemicist and performing musician whose fame even during his lifetime was equal to that of the greatest artistic figures of his century.

There are many contemporary and near-contemporary accounts of Landini's fame, some attributing him with an almost mythical status. However it is his surviving music manuscripts that reveal the most about Landini, the musician. The music of Francesco Landini is the kernel of every surviving manuscript which documents the music of fourteenth century Italy. However, even now 600 years after Landini's death, less than half his works have been recorded.

This collection presents twelve works not previously recorded as well as fresh readings from some of his most famous works. Most of the madrigals and ballatas featured on this disc deal with love, ranging from the most extroverted manifestations of love to poems of a more contemplative mood, others contain abstract and philosophical ideas pertinent to the time.

“... an excellent thoughtful and committed recording ... if you like the sounds of mediæval two and three part polyphony, this CD is a worthy investment. If you don't, get it anyway; this recording may convert you.”

I am Music - The Music of the 14th Century Vol. 3 is available for download from the iTunes Music Store.
It's available for streaming through Apple Music.

I am Music - The Music of the 14th Century Vol. 3 is available as as CD. It can be purchased online through Buywell Music or the Australian Music Centre which both offer secure online ordering.