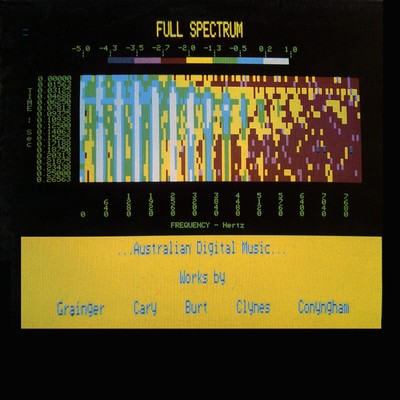 This fascinating record is a demonstration of the spectrum of musical sound generated or controlled by digital devices comes from the early days of computer music in the 1970s. It begins with the work of Australian-born pianist and composer Percy Grainger, 'Free Music 1 & 2', composed in 1935. Grainger's visionary music of the future was beyond the ability of human performers, and was years ahead of the technological means of realisation. Barry Conyngham has helped to realise Grainger's concept of freely gliding tones taken direct from a graphic score. Other works are 'Tracks from Divertimento' by Tristram Cary, 'Study for Symphony: August 9th' by Warren Burt, 'Through Clouds' by Barry Conyngham, and 'I am not a Computer' by Darius Clynes. A must for all those interested in contemporary music. Full notes and photos provided on the downloadable PDF.

Full Spectrum is available as as CD. It can be purchased online through Buywell Music or the Australian Music Centre which both offer secure online ordering.