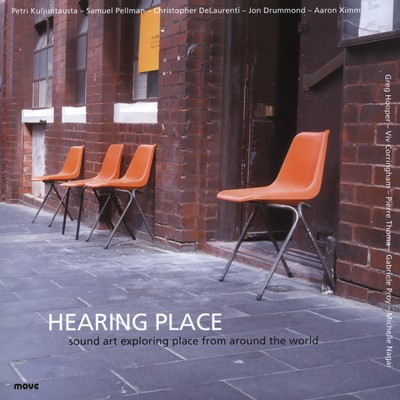 Ten sound artists and composers from around the world respond to notions of place. Featuring binaural sound, electroacoustic composition and field sound recordings, Hearing Place journeys the environment and that of our internal response.

The Australian Sound Design Project in association with Move Records is proud to announce the launch of Hearing Place, an audio CD with works by 10 artists from around the world.

The pieces respond to notions of place from a variety aesthetic viewpoints and methodologies. The works range from classic electroacoustic and soundscape compositions through to pure unedited field recordings. Ten works journey the acoustic environment and that of our internal response and provide unique insight to each locale.

Presently a Professor of Music at Hamilton College, in Clinton, New York, Samuel Pellman has composed a variety of works for acoustic and electroacoustic media.

Christopher DeLaurenti is a composer, improviser, phonographer, and music writer. His music resides at delaurenti.net along with many music-related essays and articles.

Jon Drummond is a Sydney-based composer who creates works for a variety of media including electroacoustic, live electronics, interactive media, web and installation.

San Francisco sound artist Aaron Ximm makes trips for the headphone tourist with recordings he collects around the world. He seeks to reveal the hidden music of the everyday soundscape.

Greg Hooper lectures in the Information Environments and Multimedia programs at the University of Queensland.

Viv Corringham is a vocalist based in London. She works with improvisation, electronics and Eastern Mediterranean music.

Gabriele Proy is a composer and sound artist living in Vienna and studied composition and computer music at the Vienna University for Music and Performing Arts. Her electroacoustic soundscapes and sound installations have been performed and exhibited widely.

Michelle Nagai is a New York City based electroacoustic composer and performance artist whose interdisciplinary approach utilises a myriad of physical and aural elements in the creation of site-specific performances, radio broadcasts and installations.

Hearing Place is available as as CD. It can be purchased online through Buywell Music or the Australian Music Centre which both offer secure online ordering.