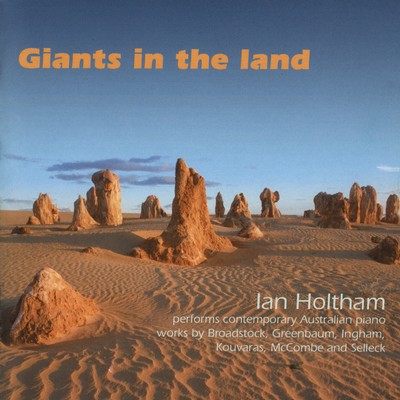 Here was sung the first songs,
here was breathed the message of the sun -
in those days there were giants in the land.
There was also magic in the air.

“offers the listener many contrasting 'landscapes' to enjoy ... This CD is remarkable for its sustained pianistic virtuosity and the depth, complexity and variety of the compositions.”

“Ian Holtham plays ... with taste and admirable musicianship ... the disc is highly recommended.”

Stephen Ingham has had a broad and varied career as a composer,music critic and academic. He was awarded a doctorate by the University of York in 1981,where his research involved the application of computers to musical composition. Since 1993, he has lived and worked in Australia, where he was first employed in the Faculty of Music at the University of Melbourne.

Giants In The Land is available as as CD. It can be purchased online through Buywell Music or the Australian Music Centre which both offer secure online ordering.