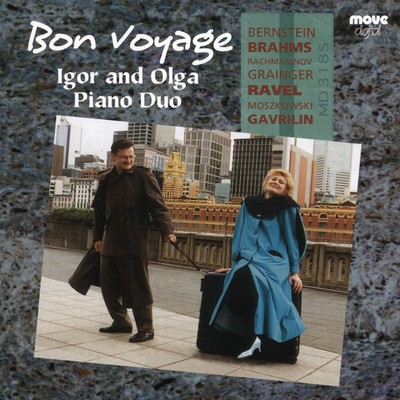 Starting in America with Bernstein's 'America', then on to Germany where you will sample the intimate delights of Brahms' 'Walzer'. After that, visit Russia for Rachmaninov's Three Duets and four pieces from Gavrillin's 'Sketches for Piano Duet'. The journey then continues to Spain with Ravel's 'Rhapsodie Espagnole' and Moszkowski's 'Dances Espagnole', finally concluding in Australia with Grainger's 'Lets Dance Gay in Green Meadow'.

This husband and wife duo are as exilharating to watch as they are to listen to. After enjoying successful solo careers in Russia and Europe, Igor and Olga formed the piano duo in Moscow shortly after marrying. It gave them the opportunity to create music together but also to explore the piano duo repertoire with its rich textures and powerful dynamic and expressive capabilities.

As a duo, they have been first-place and prize-winners in several international piano-duo competitions and since emigrating to Melbourne in 1995 have performed at Melba Hall, the National Gallery of Victoria, the Castlemaine Festival and on the ABC's Sunday Live.

Since moving to Australia in 1995, the Igor and Olga Piano Duo has given a series of recitals and has drawn the immediate attention of both professional musicians and musical critics.

“this is an attractive program from a talented piano duo.”

Bon Voyage! is available as as CD. It can be purchased online through Buywell Music or the Australian Music Centre which both offer secure online ordering.