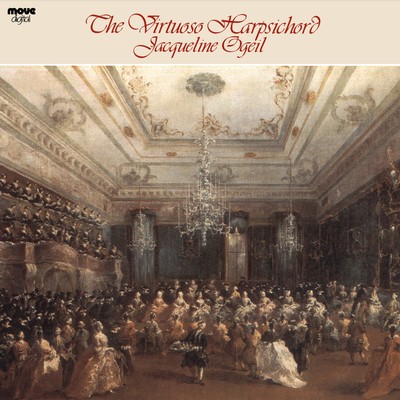 Vibrant young Melbourne harpsichordist Jacqueline Ogeil showcases the very virtuosic side of the harpsichord in a CD featuring J. S. Bach's 'Fantasia and Fugue', 5 sparkling sonatas by Scarlatti, Handel's 'Suite in B flat', Rameau's elegant 'Troisème Concert', and the premiere recording of Naji Hakim's suite 'Shasta' – Ogeil studied with the award winning composer while in Paris where he told her to make the work "bite and scratch".

Ogeil hopes that this disc will dispel any ideas that the harpsichord is old-fashioned or lacking in tonal colour. By chosing works with flair, this young talented performer demonstrates the dramatic and passionate side of the instrument.

“There's little doubting Ogeil's technical skill ... but more interesting is her musicality, in evidence from the arresting opening bars of the Bach Fantasy through to the extreme contrasts of the first of Harkim's pieces. A varied program ... the ends up saying something cogent and particular about the harpsichord.”

“Jacqueline Ogeil gives passionate and energetic performances ... (including) a suite by Naji Hakim, with whom she is studying in Paris.”

“Ogeil's playing is full of excitement and digital dexterity.”

“Ogeil's interpretations are fluent, expressive and elegant ... a solid performance with panache worthy of a musician of greater experience and fame.”

The Virtuoso Harpsichord is available as as CD. It can be purchased online through Buywell Music or the Australian Music Centre which both offer secure online ordering.