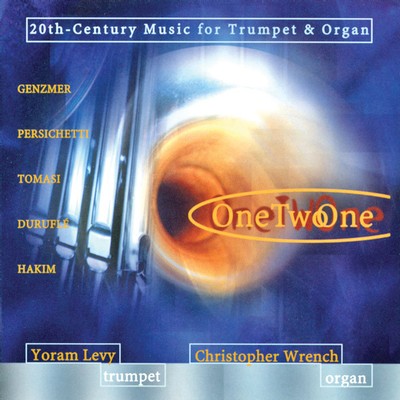 One of the few recordings to feature the Klais organ at the Queensland Performing Arts Concert Hall, One Two One is a collection of twentieth century music for trumpet and organ alone and together. Yoram Levy (previously of the Israeli Philharmonic and now principal trumpet with the Tasmanian Symphony) and Christopher Wrench (Lecturer in Organ at the Queensland Conservatorium) join forces to explore the very diverse textures and styles of Genzmer, Tomasi, Persichetti, Durufle and Hakim.

"a most entertaining and excellently performed grouping of works that are as different as they are delightful ... imaginatively produced and excellently recorded"
(Bill Hoffmann, Canberra Times)

A well sought after performer and music educator, Yoram Levy has performed as principal trumpet with the Sydney Symphony Orchestra, the New Zealand Symphony Orchestra and the Australian Chamber Orchestra. Currently, he teaches trumpet and tutors the brass ensemble at the Tasmanian Conservatorium in Hobart.

“very well recorded disc ... this is certainly worth adding to your collection .. one of the more polished presentations of recent times, showing off both instruments at the highest level”

“an impressive CD ... you will be impressed by the joyous energy ... full marks for originality, fine ensemble playing and clear and consise sleeve notes.”

One Two One is available as as CD. It can be purchased online through Buywell Music or the Australian Music Centre which both offer secure online ordering.