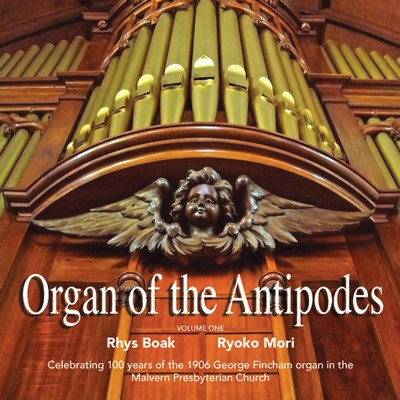 Australian organist, Rhys Boak along with Japanese organist, Ryoko Mori, celebrate the 100th birthday of the George Fincham & son organ in the Malvern Presbyterian Church. The organ was one of the final organs built by the legendary George Fincham, the father of the Australian organ building industry and one of the nineteenth century's most prolific organ builders in the southern hemisphere. Contents of this CD include Louis Vierne's monumental but rarely preformed second organ symphony, completed in 1903 just 3 years before the construction of the organ in 1906. Also included is Samuel Wesley's 'Duet' for organ, the Toccata from Leon Boellman's 'Suite Gothique' and Haydn's 'surprise' symphony transcribed for the organ.

"This is a particularly attractive compilation which features two organists of considerable merit: Rhys Boak who works tirelessly to advance the cause of organ repertoire and the Japanese-born and - trained Ryoko Mori. In the first movement of Vierne's Symphonie No 2, Boak, like some musical Zeus, responds to the score by hurling great blocks of sound through the speakers. A softly bouncing scherzo is a pleasing contrast. There is much to savour here ranging from Mori's account of Leon Boellman's Toccata from the Suite Gothic to delights such as an arrangement for organ of the andante movement from Haydn's Symphony No 94 (The Surprise).

The latter, Haydn at his most droll, is pure delight - and the Boellman Toccata is an immensely dramatic opening track. With its massive waves of sound, it is an irresistible call to attention." Neville Cohn, Oz Arts Review

“I was pleased to see the subtitle of this CD: "Volume 1" of Organ of the Antipodes. May there be many more!”

“The music is characterised by strong and sure playing”

Organ of the Antipodes is available as as CD. It can be purchased online through Buywell Music or the Australian Music Centre which both offer secure online ordering.