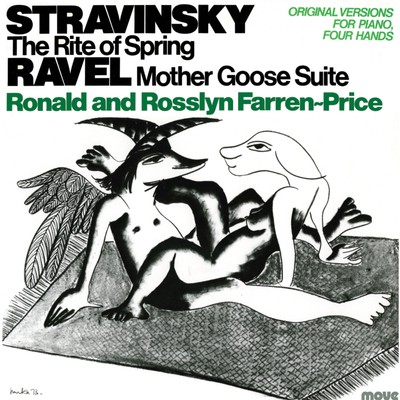 “The two compositions are starkly contrasted – The Rite's fiery staccato against the melodic flow of Mother Goose ... this is one of the most important classical recordings issued in Australia for many years.”

“Stravinsky always worked at the piano, and it is fascinating to hear the score in its original form: some of the instrumental colour may be lost, but none of the music's primitive rhythmic effect.”

“... it is a first-rate record. The playing of both works is clean, vital, full of character and splendidly disciplined.”

“Without doubt, it is an important contribution to the catalog of Australian recorded classics. ... Their performance of 'The Rite' is intense and builds anticipated climaxes strongly.”

The Rite of Spring Igor Stravinsky

Stravinsky: The Rite of Spring (piano four hands) is available for download from the iTunes Music Store.
It's available for streaming through Apple Music.

Stravinsky: The Rite of Spring (piano four hands) is available as as CD. It can be purchased online through Buywell Music or the Australian Music Centre which both offer secure online ordering.