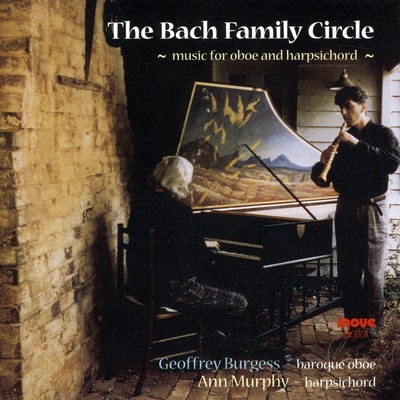 The oboe was intimately linked with the Bach family in a number of ways. This innovative and imaginative CD draws a musical link between Bach, his contemporaries and relatives, through arrangements and compositions for solo oboe and harpsichord.

"...perhaps Bach simply never met an oboist to meet the intellectual challenges of the mature chamber idiom. Had he heard Geoffrey Burgess he would surely have changed his mind."

“Burgess, an acknowledged master of the baroque oboe, does not disappoint. The 'quacking duck' sound of the badly played instrument is here transformed into a swan in flight.”

“Burgess and Ann Murphy are scintillating”

“perhaps Bach simply never met an oboist to meet the intellectual challenges of the mature chamber idiom. Had he heard Geoffrey Burgess he would surely have changed his mind.”

The Bach Family Circle is available as as CD. It can be purchased online through Buywell Music or the Australian Music Centre which both offer secure online ordering.