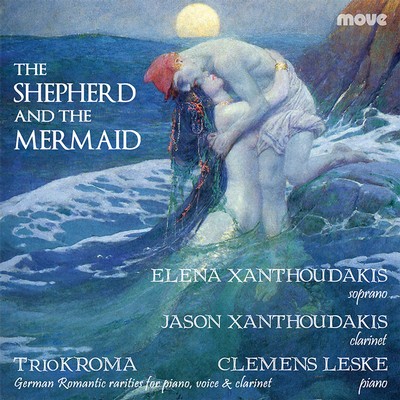 Nineteenth century art song was firmly harnessed to the instrument found in every genteel home – the piano. Other available players were eagerly welcomed to the salon and editions were published with ad libitum or obbligato parts for violin, flute, horn, cello, harmonium, and the instrument outstandingly raised in status by Mozart and Weber, and well suited in range and tone colour – the clarinet.

Much of the music on this disc was long forgotten is symptomatic of the neglect of this repertoire. A ‘Lieder recital’ gradually established itself in the concert hall rather than the household, predominantly with voice and piano alone, and the twentieth century turned a largely deaf ear to the perceived sentimentality or Biedermeier qualities of ‘salon music’. Discovering items long overlooked can bring many rewards. One item in this recital, the iconic song for this combination, Schubert’s Shepherd on the Rock, has always been admired and performed, and exerted its influence in subject matter and style on others heard here.

“Most fascinating is the title track, Peter von Lindpaintner's song of enchanted entrapment. It's a rarity amongst rarities and one which encapsulates perfectly both the richness of this repertoire and the stellar wok TrioKroma has done in rediscovering it” ★★★★

“Immaculately performed and produced, this is music that deserves much greater exposure.”

“The performers are exemplary. Elena Xanthoudakis has a lovely voice and a smooth, easy technique; her brother Jason matches her in tone and facility. Clemens Leske could probably play these pieces in his sleep; he is not so much the consummate accompanist as the consummate accomplice. Indeed all three performers and the sound technicians should be congratulated on the satisfying balance of the musical lines on this well-worth-having CD.”

The Shepherd and the Mermaid is available as as CD. It can be purchased online through Buywell Music or the Australian Music Centre which both offer secure online ordering.