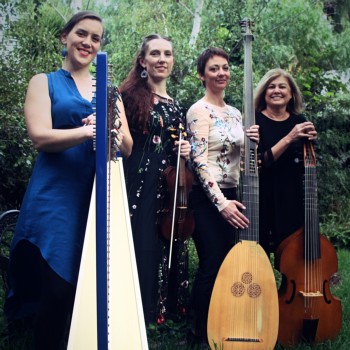 Evergreen Ensemble bridges the gap between folk music and baroque music. Known for their virtuosic programs bringing together the best of Australia's early music talent and folk icons, they weave stories back through time, rediscovering the sounds of folk melodies performed on period instruments.

"With a passion for early and modern repertoire and an ability to seamlessly cross the genres and performance styles of folk and art-music, Evergreen Ensemble is an up-and-coming ensemble with a unique musical language". (MRC)

Evergreen Ensemble was founded in 2014 by the violinist and artistic director, Shane Lestideau. Programs since that time have focused on the music of 18thC Scotland, exploring its stylistic links with Italy, its French dance connections, and producing a 2018 recording which traces the cultural ties of Northern Scotland to those of Scandinavia (Snow in Summer). The repertoire in question was often not written with a specific instrumentation in mind and the line-up of players in the ensemble is therefore varied to colour the program according to its cultural influences.

Past programs have featured iconic Australian bassoonist Simon Rickard (Pinchgut Opera), Ben Dollman (Australian Brandenburg Orchestra), Natasha Kraemer (ARCO), and famous international artists such as Chris Norman and David Greenberg (Canada) and Myriam Arbouz (France). In 2019 Evergreen Ensemble collaborates with Krishna Nagaraja (Finland) on baroque viola, and a host of Scottish musicians. Four programs will be launched in 2019, and a European tour is planned for 2020.

Evergreen Ensemble is featured on the following titles

Shane Lestideau is a musician with a variety of experiences gathered over nearly every continent of the globe. Fortunate enough to have aquired a parallel education in both Classical and Traditional irish and scottish music in Australia, she has gone on to work with baroque ensembles on some of the most prestigious stages in France, fiddled her way around Ireland and Scotland, and performed and recorded with dozens of top musicians all over Europe.

Samantha Cohen studied classical guitar at the Victorian College of the Arts, where she eventually decided to abandon the guitar in favour of the lute.