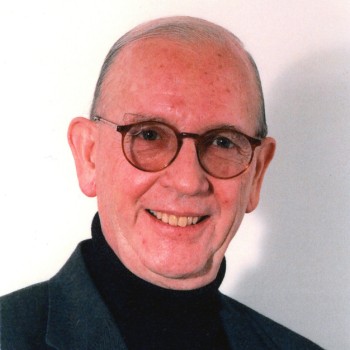 Michael Bertram was born in the United Kingdom in 1935. He won a choral scholarship to Lichfield Cathedral at the age of eight and sang full time in the cathedral choir until he was thirteen. At that age he had qualified to enter the Royal Academy of Music on a pianoforte scholarship.

Emigrating to Australia in 1952, Bertram continued his piano studies under Rex Hobcroft and Stephen Dornan in Perth and, later, Roy Shepherd in Melbourne. He was twice a State finalist in the ABC’s Concerto and Vocal competition (as it was then called), performing with the West Australian Symphony Orchestra. He also broadcast as a soloist for some years over the ABC in both Perth and Melbourne. In 1958 he obtained a Licentiate in Music (LMusA).

Turning in later years to composition (which he studied with Felix Werder and Peter Tahourdin), Bertram had the privilege of having Keith Humble give the first performance of his early Sonatina (1977). Other early compositions to receive performance include a Magnificat and Nunc Dimittis (1982) written for the Ormond College Choir and commissioned works for the Port Fairy Spring Festival: two song cycles for the soprano Margaret Haggart, I will Write to You (1992) and The Green Castle (1994) and a set of Variations for Flute and Piano (1991) premiered by Frederick Shade and Len Vorster.

His Five Pieces for Piano (1984) were included on a recent disc of contemporary Australian piano music issued on the Divine Art (UK) label whilst his overall piano output has been reviewed in Larry Sitsky’s Australian Piano Music of the Twentieth Century (Praeger, 2005).

Later works by this composer include a one movement String Quartet (2000); a Mass (2002) for choir, soloists, organ and cello, given its first performance by the Astra Choir in 2005; a chamber opera entitled A King No More (2007), [based on the Eugene Ionesco play Le Roi se meurt] and the piano pieces on this disc.

Michael Bertram is a Life Member of the Australian National Academy of Music.

Compositions by Michael Bertram appear on