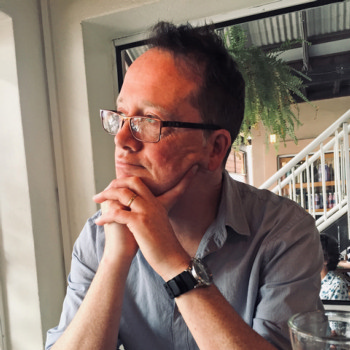 As a conductor Rohan has worked with a variety of ensembles including the Bendigo Chorale (1998-2008) and the Bendigo Symphony Orchestra (2008-2018). Rohan is currently musical director of the choir of St Paul’s Cathedral, Bendigo, a position he’s held since 2007.

Early efforts in composition were encouraged by Helen Gifford - his 2nd cousin - who continues to be a major influence. As well as tutelage and assessment of early works, Helen suggested further listening and exploration of 20th century music. The 1988 production of Gifford’s Regarding Faustus left a strong impression on the young musician.

Rohan commenced formal composition studies under Larry Sitsky and David Worrall at the Australian National University in Canberra in 1989, graduating with a B.Mus (Composition) in 1993, and an M.Mus (Comp.) in 1997. During his M.Mus he received the Harold Allan Memorial Prize.

Compositions by Rohan Phillips appear on