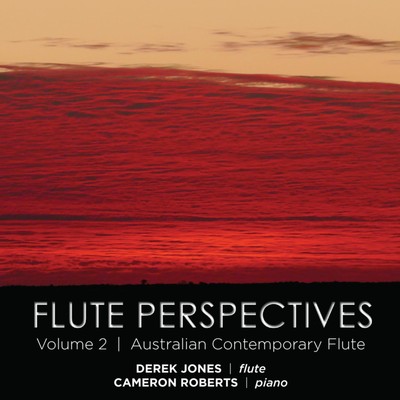 This album is a continuation of a series of “Flute Perspective” recordings which sets out to explore and bring to life established Australian flute repertoire from the 1960s through to our current day.

This second volume includes the wonderful world premier of Stuart Greenbaum’s Flute Sonata (2015) which is the seventh in a series of twenty sonatas written by Greenbaum in the new millennium. The work in four movements is a contemplation of the projected discovery in March 2015 of a huge underground ocean on Ganymede – Jupiter’s largest moon and takes the performer and listener on a fascinating journey.

Also featured is the iconic Richard Meale Sonata (1960) a great example of the avant-garde style which the composer was keen to expose to the Australian audiences. Anne Boyd’s Cloudy Mountain (1981) is also included as a continuation from Volume 1 where everyone’s favourite Gold Fish Through Summer Rain was featured. Anne Boyd’s music here represents a pivotal moment in Australia’s development artistically as a member of the Asia Pacific region and demonstrates how artists composers, politicians, chefs and others embraced our neighbourhood cultures and changed the course of Australian life!

There is a short work of Rohan Philips Fragment III (2001-2002) from Seven Fragments after Paul Celan. Derek knew Rohan from decades ago as we both grew up in Bendigo, Victoria. Rohan went on to study composition with Larry Sitsky in Canberra while he studied flute at the VCA with Vernon Hill and Thomas Pinschof. This short work is very well written for the flute with Phillips using the full gamut of colours affects and techniques.

The final work on this album is the Three Minatures of Mark Pollard (Sheridan Close, The Amber Room, and Illoura House). It is a beautiful collection of Minatures played on three different flutes including alto flute and piccolo and which describe three buildings along St Kilda Rd, Melbourne Pollard sketched the pieces based on what he saw, while passing by as a passenger on a tram.

“Together Jones and Roberts navigate even the most challenging musical terrain with dextrous articulation, magnificent sensitivity and an ensemble that is razor-sharp. The achingly gorgeous tonal quality in Jones's rendering of Mark Pollard's The Amber Room is a standout of the album, as is Roberts' sparkling accompaniment in Anne Boyd's Cloudy Mountain. By turns virtuosic, contemplative and haunting, this stunning collection leaves no stone unturned in its exploration of one of the world's oldest instruments.” ★★★★★

“Diverse styles of five composers provide a fascinating sampling of Australian flute music over a span of sixty years. Listening through this CD is a totally rewarding experience. The pieces have been discerningly chosen to provide variety, contrast and perspective. Derek Jones and Cameron Roberts are highly accomplished musicians whose performances demonstrate a strong affinity with the music as well having the virtuosic and interpretative skills required.”

Flute Perspectives 2 is available from the iTunes Music Store and Apple Music.

Flute Perspectives 2 can be purchased online through Buywell Music or the Australian Music Centre which both offer secure online ordering.