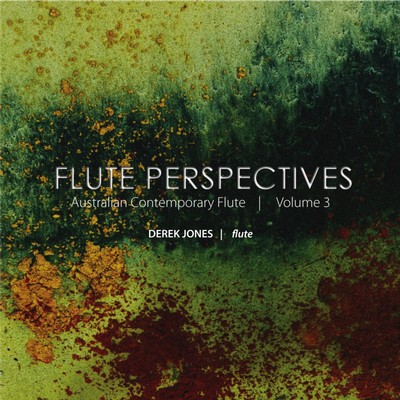 In this collection are exciting new works by the very talented Tom Henry, whose compositions are becoming well known, ranging from full orchestral works to smaller chamber, and solo instrumental works. There are also new works from Canadian born Australian resident Linda Verrier, and Melbourne based Johanna Selleck’s Déjà Vu, both taking flute techniques to the edge of the flute's limitations. Rohan Philip’s newly composed Invention V, encapsulates the isolation felt during the covid lockdowns. Rounding out the album Jones swings back to Miriam Hyde’s 1962 Sonata for flute and piano, with the very beautiful and lyrical slow movement - one of Jones’ all time favourites.

Pianist Jerry Wong from the USA, and well known Australian pianist Leigh Harold join Derek on this album. It was recorded at the Melbourne Conservatorium of Music’s Ian Potter Southbank Centre between lockdowns, with just enough time to enter the building to complete this third album of “Flute Perspectives” in 2021.

“I hope you enjoy listening to this album as much we did creating it!” Derek Jones

Canadian-born Linda Verrier graduated from the Royal Northern College of Music, in Manchester, and has had her music played and recorded in the UK, US and Australia and broadcast on the Australian Broadcasting Corporation (ABC).

Flute Perspectives 3 is available as as CD. It can be purchased online through Buywell Music or the Australian Music Centre which both offer secure online ordering.