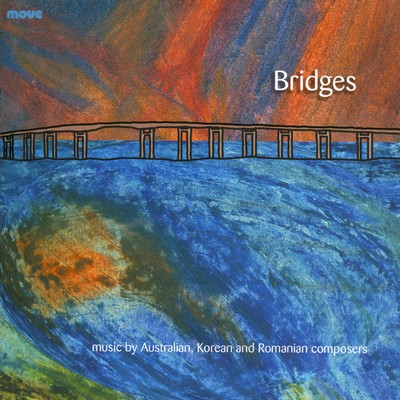 It represents new music from three distant areas - Eastern Europe, North Asia and Australasia. For many decades Romanian, Korean and Australian musical voices have been mapping out their cultural identities in relative isolation. Romanian composers were cocooned from the wider musical community due to their country's repressive communist regime. Korean composers only reconnected with their musical roots in the 1960s after the years of Japanese occupation in the earlier part of the twentieth century. Australian composers, while not enduring political constraints, were geographically isolated from the main activities in Europe and America.

While the music contained in this recording might not branch too far from a European musical epicentre, they do demonstrate the bridges that have been built by the academic staff and postgraduate students at the School of Music-Conservatorium at Monash University, and their colleagues in other parts of Australia, Korea and Romania. At the present time, music from Australia, Korea and Romania forms a significant part of the musicological and performance-based research activity within the School. This CD therefore constitutes a tangible research outcome for the School and highlights the strengthened individual intersections that have been developed between musicians, composers and musicologists rather than the reinforcement of any globalised cultural world view.

Violinist Fintan Murphy is currently a Senior Lecturer and Co-ordinator of Strings at the Monash University School of Music-Conservatorium. He has worked with several youth orchestras including those of the National Music Camps, The Australian Youth Orchestra and is currently the Director of the Melbourne Strings Ensemble.

Timothy Phillips' teachers have included percussionists John Seal, Daryl Pratt and Isao Nakamura. He has performed with numerous orchestras and ensembles both in Europe and Australia including Ensemble Modern, the Frankfurt Radio Symphony Orchestra, the Australian Art Orchestra and Libra.

David Bollard has been a staff member at a number of Australian university music schools lecturing in piano and related studies. He was a member of the Australia Ensemble from its inception in 1980 until 1998.

Korean composer Chang Hye Ryun has taught at numerous universities in Korea and is currently on the academic staff at Sungkyul University.

Since 2000 Dediu has been head of composition department at the National University of Music, Romania. He has written a prodigious amount of music ranging from electronic and solo instrumental compositions to orchestral and operatic work.

Bong-Ho Kimstudied composition at Dan-Kook University in Seoul and received his MA and DMA from Ohio State University under the guidance of Prof. Thomas Wells. Currently, he lectures in music at the University of Ulsan.

Sorin Lerescu studied composition with Tiberiu Olah and Anatol Vieru at the National University of Music in Bucharest. He has composed across the genres, and has had his music performed in many European countries and Australia.

Stefan Niculescu has won many composition prizes including two from the Romanian Academy (1962 and 1972) and his music has been performed throughout Europe, and in Korea, Israel and Australia.

Bridges, Volume 1 is available as as CD. It can be purchased online through Buywell Music or the Australian Music Centre which both offer secure online ordering.