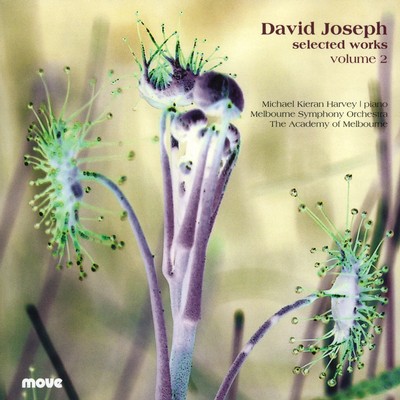 The second volume in this series from Australian composer David Joseph, features performances from the Melbourne Symphony Orchestra, The Academy of Melbourne, and pianist, Michael Kieran Harvey in the following works:

Written in 1999 for the Zagreb Soloists and at the invitation of the 20th Music Biennale Zagreb. Scored for small string orchestra (with option for augmentation) the work's concern was to evoke something 'Eastern', something evocative of Slavic sensibility, as well as the romance of 'Beyond the Danube', to Rimsky-Korsakovian images of flying carpets, harems, fanatical scimitarred warriors and the gorgeousness of the Orient, vis. Scheherezade. Indeed, one review describes the work as a sevdaha or Persian love dance. Those influences aside, the work could equally be described as Variations on a theme of Vaughan Williams - the theme being adapted from the slow movement of the Sixth Symphony. The melodic structures of minor thirds and semi-tones seem to lend themselves to the redolence of the East with similar force as to traditional Anglo-Celtic music (cf. the opening of Sir Arnold Bax's Third Symphony). Essentially the work is an impressionistic fantasy moving through a variety of musical scenes like a loving gardener tending and sensing the aroma of his creations. It is the composer's contention than melody is the only meaningful musical discourse - melody and counterpoint. The Academy of Melbourne is conducted by Brett Kelly and recorded live.

This work was written in consequence to receiving the Albert H Maggs Composition Award in 1997. The work is in one movement formed from the idea of variations emanating from the opening passages. The lack of any other formal restraint allows the music to explore to the fullest degree a pianistic philosophy in pursuit of colour, detail and the kind of brilliance that only a piano in the hands of a virtuoso can provide. The work was inspired by listening to a performance by Michael Kieran Harvey of the Liszt B minor Sonata. Ravel, Messiaen, and Rachmaninov are all composers whose pianistic philosophies have influenced this work. The Rhapsody was written for, and dedicated to Michael Kieran Harvey. The recording was made at Melba Hall at The University of Melbourne before a live audience.

CONCERTO FOR PIANO AND ORCHESTRA (1996)

Commissioned by the Melbourne Symphony Orchestra, this concerto was written for Michael Kieran Harvey who requested a 'challenging' work. Written in one movement, the musical material emerges as a result of conflicts between the soloist and orchestra. The opening sequences, a loose form of variations, gradually develop the melodic structures and thematic material that dominate the work in its full-blown development. Although the resemblance may appear slight at first hearing, the Concerto is modelled upon the first movement of Vaughan Williams' Symphony No 6, taking influence from that work's strength and directness. Other influences include the astonishing pianism of Ravel and Rachmaninov, and the gorgeous harmonies of Messiaen. The recording was made from the live performance at the Melbourne Concert Hall.

David Joseph Selected Works, Volume 2 is available as as CD. It can be purchased online through Buywell Music or the Australian Music Centre which both offer secure online ordering.