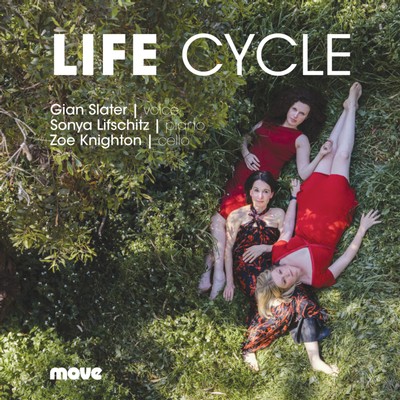 Zoe Knighton: "Song cycles invariably tell an emotional story, but this one hit me immediately with the absolute sincerity of the text and the way the music hugs the words. It is the ultimate tribute to motherhood. In first hearing these songs, I felt simultaneously grateful for my mother and also for the gift of motherhood which is one of life's most precious. One of the most extraordinary elements of this work is that the words truly get inside the pregnant psyche ... and they were written by a man."

Moving, occasionally shocking and ultimately uplifting, its story develops through the themes of anxiety and impatience which often comes with pregnancy, through sleepless nights nursing a newborn and the changing perspective of watching a child grow.

Life Cycle is about the rarely explored theme of the wonder and lurking fear of motherhood. It is composed by the highly regarded young British composer Emily Hall, with lyrics by acclaimed author Toby Litt. Toby Litt’s lyrics have an almost uncanny ability to capture female experiences of motherhood, and has returned to the theme of losing and having children both in fiction and in his autobiographical writing.

Life cycle was commissioned by Opera North (UK) and was premiered in 2011. Emily Hall and Toby Litt have collaborated on three songs cycles to date. Others include Befalling on unrequited love and Rest on death.

Praised by the New York Times and The Age for her “dynamic” and “powerful” performances, and by the Woodstock Times for her “miraculous keyboard technique and musicianship”, Ukrainian-born pianist Sonya Lifschitz is internationally recognised as one of Australia’s most innovative, fearless and fiercely creative musical voices.

“This is a fascinating recording. Gian, Sonya and Zoe have combined their imaginations to perform and produce a unique addition to the world of vocal music. Gian Slater has the unusual ability to sing with a basically untempered scale even when she sings with piano, which, by definition, forces the use of the tempered scale. On this recording, Gian uses her talent, ear and heart to ever so slightly ‘brighten’ or ‘darken’ specific intervals. This ability as well as adapting to the restraints on intonation when working with the piano, is truly amazing.”

Life Cycle is available as as CD. It can be purchased online through Buywell Music or the Australian Music Centre which both offer secure online ordering.