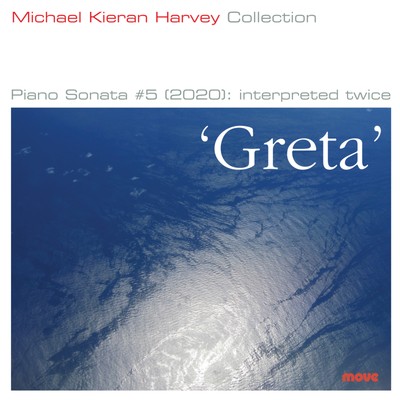 One of the most extraordinary developments in recent years has been the emergence of a young spokesperson for the coming generations, those who will have to deal with the climate catastrophe caused by humans. Her name is Greta Thunberg and her story is well-known.

Michael Kieran Harvey: "This sonata is an atonement from my generation to Greta's, hence the dedication to my two children, and is formed through a sequence of hermeneutic windows based on the letters of her first name. It was written and realised during the 2020 pandemic. The rhetorical nature of the piece suggests a concerto, but in this case the soloist is truly alone, courageously presenting their arguments in the face of indifference, ridicule and hatred. The work is in five sections. The possibility of using an electric keyboard, hopefully deriving power from a renewable source, frees the Sonata/Concerto from the domain of the concert grand piano with its connotations of upper class luxury and collusion with conservatism. This versatility gives the work a further connection to the protean vision of its namesake."

The accompanying poem REGRET is by Arjun von Caemmerer. It selectively catalogues/arranges a small sample of precarious Australian flora and fauna, including some species now lost altogether, and some whose grip on survival appears increasingly tenuous in the face of accelerating climate change.

Hear 'Greta' in both versions, with Arjun von Cammerer's poem 'Regret' as the visual element:
Greta

“The new piano sonata is in five movements and the entire work has been recorded twice – once using piano and once on electronic keyboards. I prefer the piano version but it’s quite fascinating to explore the differences between the two. The music is uncompromising, but Harvey’s piano playing is absolutely extraordinary in its virtuosity.”

“Michael Kieran Harvey uses all his attributes of heart, mind and hands in the composition and execution of this astonishing piece of music. Harvey has replicated each of the movements on an electronic instrument, because he feels there is an association of piano with the upper class and conservatism. To be honest, with Harvey’s music, that association would require an extreme leap of faith. However, the opportunity for interpretation on different instruments from the original, changes everything that one hears. Harvey draws upon differing timbres of the electronic instruments he uses, even, as with the last movement, using multiple contrasting tone colours. Equally, the differentiation of stereo sound, with distinctive bass in one channel and treble in the other, draws one’s attention to different facets in such a way that the individual layers, counter-rhythms and melodic lines prominent in the original, are entirely altered with their electronic interpretation. The second movement is particularly transformed in meaning with the use of a Fender Rhodes, a forgiving sound that cushions the prevailing mood of this movement. The harpsichord interpretation of the ‘E’ movement is also fascinating, separating so distinctively, as with the first movement, bass sounds from treble.”

“(Michael Kieran Harvey) writes virtuosic music that he then despatches with aplomb. Much of this music from Harvey is highly energetic and sometimes borders on being manic but maybe considering the topic of climate change and its massive problems it is most appropriate. In many ways it is like an extended improvisation. The work appears in two versions so we hear 31 minutes performed on a concert grand piano and then again on various electric keyboards. Different listeners might prefer one over the other whilst I simply enjoyed the variety that the diverse instruments offered.”

Greta is available as as CD. It can be purchased online through Buywell Music or the Australian Music Centre which both offer secure online ordering.