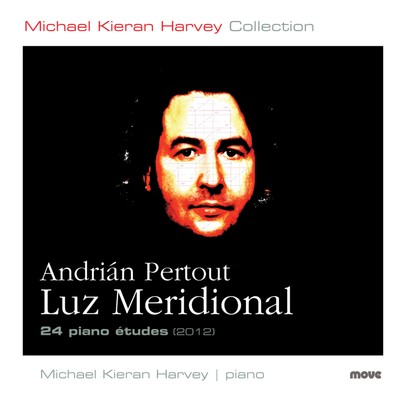 The bonus DVD-ROM contains video of seven of the études, a short documentary about the work, and various PDF documents and scores about Luz Meridional, including a long analytical essay by Arjun von Caemmerer. These can be copied from the DVD to your computer.

“Rarely do I hear a new work that is so strong and meaningful and as full of so many delights as Andrián Pertout’s monumental piano work Luz Meridional. This is singularly one of the most important piano compositions ever written by an Australian composer. For me it ranks with the best works of Larry Sitsky and Richard Meale for intellectual approach, musical insight and sheer joy. Opening with Nino durmiente, a music that seduces with its innocence ... Elegia creates a sound-world that demands the utmost concentration ... Retrospectivo is a standout with rapidly moving notes evoking starlight and other ‘nightsky’ phenomena ... the movements are laid out in just the right order creating a perfect balance between the sombre and the introspective and the energetic. The performer on this CD, Michael Kieran Harvey, is the not only one of the finest pianists ever in Australia but one of a handful of ‘cultural warriors for the good’. He takes on challenging music and makes it a thrill for the audience. Playing Luz Meridional MKH draws forth varying textures and colours that allow the work to take on a life of its own. This is pianism of the highest order.”

“The works are fiercely virtuosic and empty extended techniques including muting, plucking and strumming of the piano strings. Luz Meridional was written for Michael Kieran Harvey, a pianist renowned for both his technical prowess and eagerness to embrace exploratory new works.” ★★★★

“Written for Harvey, the piece naturally exploits his strengths, notably the ability to play superhumanly fast and loud. Pertout, though, skilfully organises the cycle (alphabetically by composer) so that there is plenty of contrast. The dreamy ostinatos of the opening Niño durmiente (a homage to Roy Agnew) make a fine foil to the increasingly urgent terse pointillistic gestures of Encentro, derived from John Antill’s Corroboree; the comparative sparseness of the Don Banks-inspired Diversión, with its background pedal-notes and foreground explosions of fiortura, is likewise set off by the moto perpetuo of the Balada after Arthur Benjamin. The piece is massive in conception and execution, a credit to both composer and performer.”

Luz Meridional (Southern Light) is available as as CD. It can be purchased online through Buywell Music or the Australian Music Centre which both offer secure online ordering.