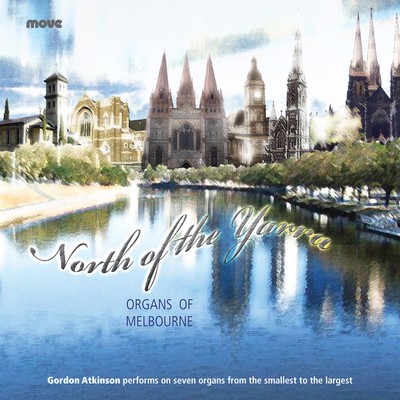 The River Yarra continues its major role in the development of Melbourne. The Wurundjeri people called it 'birrarung' - 'river of mists and shadows'. When asked the name of the small rapids in 1835 by members of an exploration party, the local Aborigines replied "Yarro Yarro" meaning that 'it flows'. This mishearing led to the name by which it is now known.

The city developed quickly on the north side of the river: commerce and business flourished. Homes, stables, stores, arcades proliferated. Churches, theatres, the town hall, all indicated sudden and continuing growth.

Gordon Atkinson: "Late in 2007, when driving through the north-western suburbs of Melbourne, I came upon the nave of what was planned to be a large church. It was never completed. On looking through a glass and steel structure filling the intended crossing arch, a small single manual organ was seen. With further enquiries, I found that this instrument is considered to be the oldest surviving organ built in the early days of the city, c. 1855. Certainly the wood pipes were made in Melbourne, and it can be assumed that the metal pipes came from England. That this organ should be recorded came to mind, so the chance viewing of St Linus' Church, Merlynston, led to thoughts that some of the city's organs should be included, from the oldest to the newest."

The result is a CD presenting seven very different organs located on the north side of Melbourne's Yarra River. The disc come with a 16-page booklet with music notes and photographs of the organs.

Although born in Melbourne, Victoria and retiring there in 2005, Gordon Atkinson spent much of his life in England and North America. Following study in Melbourne with A.E.H. Nickson, he attended the Royal College of Music in London from 1950 to 1953, where Harold Darke, Patrick Hadley and William Lloyd Webber were among his teachers.

“... first-rate professional production of the disc ... records the important organs of Melbourne, Australia ... a gorgeous harmonic flute features in a brief Dupré Antiphon in the vast acoustic of St Patrick's Cathedral ... a very substantial Rieger organ in the Scots' Church, Dr Atkinson plays his own Adoro Te ... at the Melbourne Town Hall organ he plays a Barrie Cabina sonata, recorded here with verve ... program notes contain photos of the organs.”

North of the Yarra - Organs of Melbourne is available as as CD. It can be purchased online through Buywell Music or the Australian Music Centre which both offer secure online ordering.