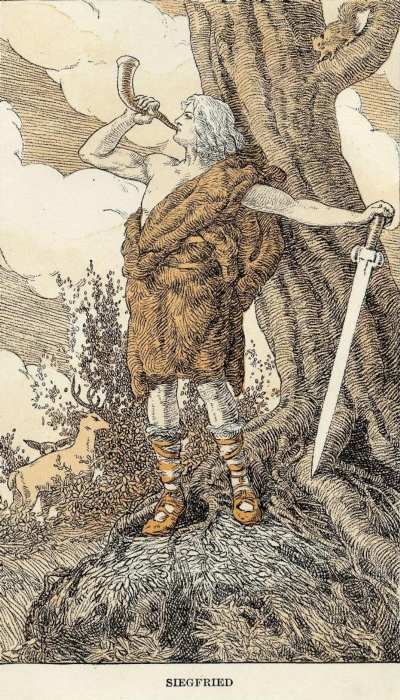 Barney Zwartz has written an article in The Age and SMH about horn player Mark Papworth's Wagner project. Siegfried’s Story, a CD of 12 scenes from the Ring adapted for the highly unusual combination of horn, tuba and piano, recording under the name Bonza Brass.

A Melbourne tram driver, Mark Papworth, has launched one of the most original and intriguing Wagner project in years. Actually, although Papworth does drive trams for financial security and because the hours suit his many projects, he is a highly accomplished musician who studied in Melbourne, Perth and the United States for years and is equally at home on three very different types of French horn: baroque, natural and modern.

Papworth fell in love with Wagner’s four-opera Ring cycle at 16 when he heard Georg Solti’s famous recordings, and “it’s blown my mind ever since”.

In 2011, after studying at the University of Indiana, he returned to Melbourne and began adapting sections of the Ring for French horn and piano. In 2016, when he had eight pieces, tuba player Per Forsberg expressed an interest. So Papworth reworked all eight, giving the “meaty bass parts” to the tuba, and added four new movements. The fruit is Siegfried’s Story, a CD of 12 scenes from the Ring adapted for the highly unusual combination of horn, tuba and piano (Rosa Scaffidi), recording under the name Bonza Brass.

The biggest challenge, Papworth says, was working out how to fit parts written for one of the biggest orchestras ever into three instruments. “Eventually I decided to give all the crazy string writing to the piano, the melody to the horn and a nice strong bass line to the tuba. The piano was good for filling in all the blanks.” But he ensures that the tuba has quite a few moments in the sun. Sometimes the combination is highly effective, such as the creation of the world in the prelude to the first opera, but just occasionally one misses the heft that comes with an orchestra of 100. Still, it is always fascinating.

The trio wanted to record the performance for their own pleasure, and approached Melbourne-based classical label Move, where CEO Martin Wright was sufficiently intrigued that he offered to produce the CD and issue it. It came out earlier this year, and Papworth hopes it may be an accessible way in for newcomers to Wagner.

Papworth started playing the horn extraordinarily young. He went to one of the few state primary schools that had an orchestra and recalls coming home in tears in Grade 3 because he wanted to play the flute but the conductor insisted he had to learn the horn. “So my father went to his cupboard, pulled out an old instrument, and said ‘this is a French horn and this is how you play it’. His aunty gave it to him when he was a teenager, and my father didn’t believe in throwing out musical instruments, so he carried it around with him for 30 years,” Papworth recalls. It turned out to be a Czech horn from the 1920s, itself now a historic instrument.

Bonza Brass is now working on another CD of Papworth’s Wagner arrangements – Die Meistersinger, Parsifal and the Wesendonck Lieder.

This article by Barney Zwartz was originally published in The Age and Sydney Morning Herald on 28 April 2020.