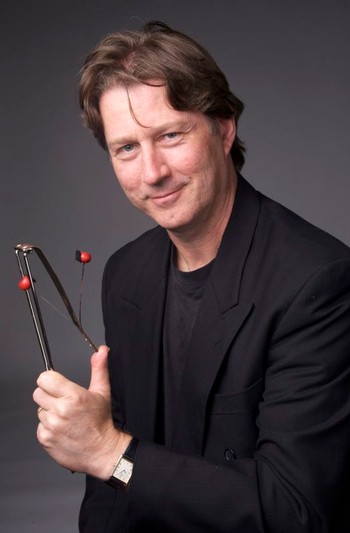 Peter Neville is one of Australia's most accomplished percussion players. He has a particular interest in twentieth century music and has worked extensively in Australia with such ensembles as Elision, the David Chesworth Ensemble, the Southbank Ensemble, Jouissance, the Chronochromie Duo and the Nadoya Dance and Music Company.

Peter Neville is a graduate of the Victorian College of the Arts, where in 2000, he was appointed Head Of Percussion. Prior to this appointment, he worked as a freelancer, performing across a wide range of musical styles.

As a member of the Australian Youth Orchestra Peter toured Europe in 1984, performing in the Royal Albert Hall and the Concertgebouw, Amsterdam. He worked for fifteen years as a part-time percussionist with the Melbourne Symphony, including its 1988 tour of Japan and its Australian tour with Elton John. Also with the MSO, Peter was part of the Australian premieres of Olivier Messiaen's Turangalila Symphony, in the presence of the composer and Krzysztof Penderecki's Te Deum, conducted by the composer. He was part of the MSO's all-Takemitsu programme in Suntory Hall, Tokyo, also in the presence of the composer. Peter has also worked with the Australian Chamber Orchestra, the Tasmanian Symphony Orchestra, and the Philharmonia Orchestra of London, in their Melbourne performance of Tchaikovsky's 4th Symphony under Vladimir Ashkenazy.

Peter has also performed in numerous musicals, including West Side Story, Cats, Hello Dolly, The Secret Garden and in three Australian tours of the Broadway version of The Pirates of Penzance. He toured Australia as musical director with the hit show Tap Dogs. Other theatrical tours include the Australia/China tour of Playbox Theatre's Cho-Cho-San, and Richard the Third with the Royal Shakespeare Company.

As the percussionist of the Elision Ensemble, Peter premiered works such as Chris Dench's Driftglass for percussion and ensemble and Liza Lim's operas The Oresteia and Yu-Ling Jie. Other contemporary Australian opera premieres include Brian Howard's Metamorphosi with the Victorian State Opera, Andrew Ford's Poe and Michael Whitiker's The Bamboo Flute with the Australian Opera, and Mark-Anthony Turnage's Greek with ChamberMade Opera.

Peter Neville appears on CD recordings ranging from Elision to pop albums by Peter Andre and Deborah Conway and the experimental industrial album New Maps of Hell by London based Paul Schutze.

As well as the Elision Ensemble, Peter has been or is currently a member of the groups Jouissance, Nadoya, the David Chesworth Ensemble, The Southbank Ensemble, the duo Chronochromie, and The Zappa Instrumentaale amongst others. He has recorded with several of these groups and toured with them to Norway, Estonia and the U.S.A.

Peter has a developing profile as a composer having written works for percussion quartet, voice, percussion and saxophone quartet, as well as for The Southbank Ensemble and companies such as Handspan Theatre and Skylark/Playbox.