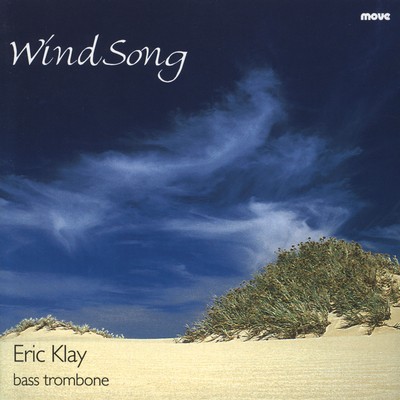 From Oz comps to Big Band — 'WindSong' captures them all!

It is unique to combine so many eclectic styles featuring bass trombone on the one disc. "It really does show off the instrument" said trombonist Eric Klay.

The eclecticism found in 'WindSong' is realised in pieces like 'Tropical Funk' featuring the superb improvisational skills of saxophonist John Barrett juxtaposed against new Australian compositions by Ross Edwards: 'Maninya IV', 'Sonata for Two Trombones' by Lawrence Whiffin, and Paul Sarcich's 'Music for Tubes and Sticks'.

Fantastic arrangements of Ellington's 'Don't Get Around Much Anymore', Gershwin's 'I've Got a Crush on You', and Richard Rodgers' 'Nobody's Heart Belongs to Me' complete the line-up.

In 1986 Klay commissioned, and gave the first performance of, Paul Sarcich's 'Concerto for Bass Trombone and Orchestra' to enthusiastic audiences.

Eric Klay has been the Principal Bass Trombone of the Melbourne Symphony Orchestra since 1977. Prior to this appointment he performed with the Elizabethan Trust Mlebourne Orchestra from 1976 - 77. He studied with Mr Roger Davies at The University of Melbourns, Faculty of Music, graduating with a Bachelor of Music Education Degree.

“I'd give the performance at least four stars.”

“WindSong has a varied program that amply demonstrates [Klay's] versatility, his artistry and professionalism.”

WindSong is available as as CD. It can be purchased online through Buywell Music or the Australian Music Centre which both offer secure online ordering.