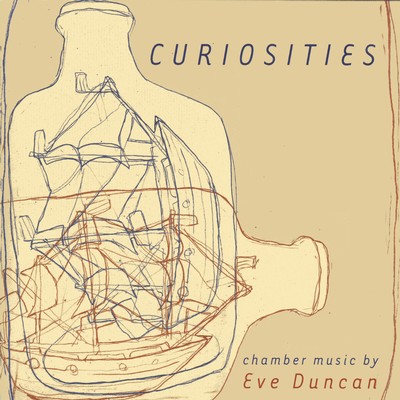 Eve Duncan said this about her composition, "Behind the material world one senses a deeper world of inspiration, mathematics, spiritual beings, living physical and psychological archetypes; a living, breathing reality of invisibility. Composition is the means by which I swim through this sea of complex activity, trying to understand what influences human, animal and mineral evolution.

My music is architecturally conceived; however I allow the individuality of specific musicians to strongly influence the compositional elements such as rhythm, harmony, texture and melody: they are a rich resource for the unfolding of the music."

“There is a Satie-esque quality to some of the works which is intriguing ... Michael Kieran Harvey's contributions deserve special praise.”

“These discs feature both Australia and overseas musicians, who perform with accuracy and obvious enthusiasm. Curiosities is the perfect title for this collection of ecletic pieces and is well worth the discovery”

Curiosities - Chamber Music by Eve Duncan is available as as CD. It can be purchased online through Buywell Music or the Australian Music Centre which both offer secure online ordering.