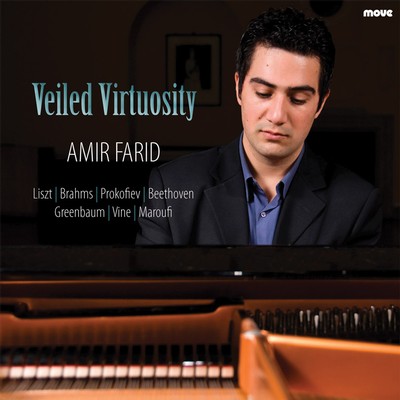 Amir Farid has been described as "a highly creative musician - a pianist of great intelligence and integrity. He brings strong musical substance to all that he does, imbuing it with his own particular experience and understanding", and who "in a well populated field...distinguishes himself for all the right reasons".

“This young Australian pianist offers a debut recital of considerable variety. Beethoven’s mighty Waldstein is the big work and is given a solid performance. The Brahms Rhapsody, at nearly 11 minutes, is one of the largest of the composer’s works in this genre. Multi-sectioned and varied, it shows off Farid’s many pianistic talents, as well as his intellect to hold such a work together quite well. Liszt’s most beautiful Consolation is played with all the reverence it deserves. Carl Vine’s (b. 1954) Bagatelles are simply wonderful music and rich in styles. This is my first time hearing them. There is an uneasy Nocturne, a nervous Scherzo, an impressionist love song, an odd jazz jam session, and a very stark and compelling fifth Bagatelle called ‘Threnody: For all the Innocent Victims’ that was premiered by Vine in 1994 at an AIDS event in Australia. This is an excellent beginning for a clearly talented young pianist with much to offer.”

“Veiled Virtuosity is one of those discs that celebrates a lot of good things in one neat package. First and foremost, it celebrates the engaging artistry of an accomplished young musician. Farid’s experience in accompaniment and in chamber music has helped him develop a sensitivity for texture and colour that translates well to his solo playing…Vine’s bagatelles are an excellent vehicle for Farid’s nuanced approach to timbre and mood setting. The virtuosity is not so veiled in the tumultuous conclusion of the “Waldstein” or in Prokofiev’s Toccata; here we experience Farid in joyous full flight. Perhaps the veiled virtuosity lies in local companies such as Move continuing to promote Australian composers and artists in all their glorious diversity?”

“In this debut album, the virtuosity is often in full view with a gutsy performance of Beethoven’s Waldstein sonata, the grinding Prokofiev Toccata and a brisk account of the Brahms B minor Rhapsody. But the interleaving pieces give this expert young artist more space to stretch his interpretave wings in a delicate review of Liszt’s mildly virtuosic third Consolation, matched by Stuart Greenbaum’s elegiac Evocation, which Farid premiered four years ago. Another Australian features in Carl Vine’s splendid 5 Bagatelles, here carried off with a panache rivaling the pianist/composer himself. Two short works by Iranian Javad Maroufi make gentle acknowledgement of Farid’s family/cultural heritage.”

Veiled Virtuosity is available as as CD. It can be purchased online through Buywell Music or the Australian Music Centre which both offer secure online ordering.