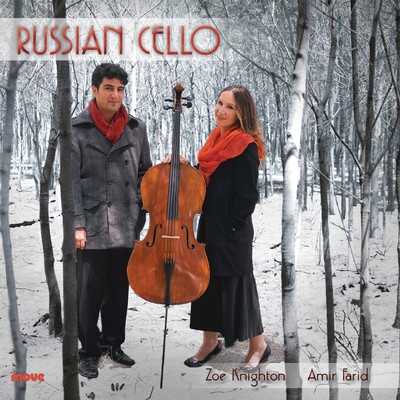 A duo that relishes playing unknown works alongside much loved classics, Zoe Knighton and Amir Farid enter the world of Russia with the launch of their their fifth CD on the MOVE label - Russian Cello.

Inspired by the combination of cello and piano, they perform works by Rachmaninov, Gretchaninoff, Prokofiev, Stravinksy and Glière in a CD celebrating a romanticism in composition.

"This CD is chockablock with luscious melody after luscious melody. These Russian composers really knew how to tear at heart strings and to make an audience sit up and listen" writes cellist Zoe Knighton "It has been a really rewarding CD to record - we are particularly proud of unearthing the Gretchaninov sonata which is a real gem."

Reviewing the concert to launch the CD on 20 April 2015, Joel Carnegie (The Age) said: "Endearing and earnest, the duo commenced the concert with the crowd pleasing Vocalise from Rachmaninoff – a performance that offered exquisite and at times surprising moments from the pair. Grechaninov's Sonata for cello and piano in E, Op.133 followed – with the contrasting and extended work allowing for jaunty dance-like sequences, floating cello lines, and vigorous melodic back and forths between cello and piano – requiring complete focus from Knighton and Farid.

"Glazunov's Elegy in G minor, Op. 44 continued the exploration of mood, with cellist and pianist presenting a collection of emotional states, in this sombre lament for a deceased person. Knighton's reflective and 'heart softening' cello lines in particular were particularly noteworthy.

"Stravinsky's Russian Maiden's Song from his comic one-act opera Mavra set Knighton and Farid the task of depicting a woman embroidering in her living room. Gliere's Album Leaf No. 5 offered the pair space to indulge the audience with some quiet contemplation, and Prokofiev's Sonata in C, Op. 119 rounded out an well-rounded evening of hallmark expat Russian fare."

“The great discovery (for me at least) was the cello sonata by Alexander Gretchaninov, his opus 113, a work completely unknown to me, but a knockout, and beautifully played by these two artists as well.”

“If there is one nationality who really wrote with hearts on sleeves, it was the Russians. If there is an instrument that can really explore the torment, it's the cello. Russian Cello, is a wonderfully colourful project for Zoe Knighton and Amir Farid who deliver a selection from known masters (Stravinsky, Rachmaninov, Prokofiev) and less known contemporaries (Glière, Gretchaninov and Sokolov). The duo start with an exquisite rendition of Rachmaninov's Vocalise that allows Knighton to warm up her thrilling tenor-sound, sensitively accompanied by Farid. The programming continues with other 'songs without words' including an enchanting Album Leaf from Glière followed by Stravinsky's eccentric, folk-inspired Chanson Russe. The playing goes up a gear with a pair of Glazunov items, beginning with Chant du Ménéstrel. Knighton's portamento is suitably full of woe and in the substantial Elégie she really gets to show much more range, muscling into her lowest register with grit. Farid is an attentive partner in crime. Both are attuned to each other's subtle musical choices. Grechaninov's Sonata is the first long-form piece on the album. With charming interjections from the piano and a pretty melody for the cello it's a lovely warm up for Prokofiev's Sonata, which gives Knighton and Farid a kaleidoscope of texture and colour to play with. It's cheeky, thrilling and uncertain, as Prokofiev should be.” ★★★★

Russian Cello is available as as CD. It can be purchased online through Buywell Music or the Australian Music Centre which both offer secure online ordering.