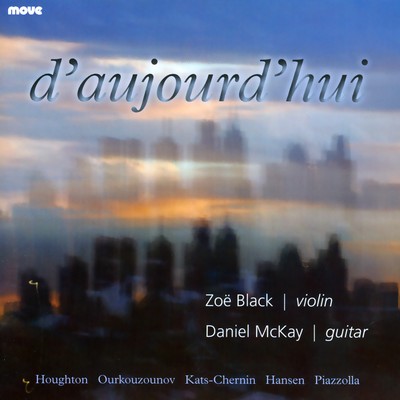 Given the contemporary nature of the repertoire, and the fact that two of the works here receive their premiere recordings, it seems apt to 'borrow' the title from Piazzolla's concert-hall tango 'of today', Concert d'aujourd'hui.

With the obvious exception of Piazzolla, the whirlwind tour through Europe, Argentina and Australia heard on d'aujourd'hui is provided by some of Europe and Australia's most exciting living composers.

“It’s been a while since this CD was released. Finally I’ve had a chance to listen to and review it. It was definitely worth the wait; this recording deserved much more attention back in 2008 than it seems to have received.
Like every Move record I’ve had the chance to listen to, this is beautifully recorded. The competing demands of violin and guitar on the audio engineers cannot be overstated. The subtleties both of these instruments are able to attain, especially in the hands of such skilled players, can be hard to capture. This recording manages to do this while paying full respect to the louder presence of the violin in particular. The balance is very pleasing. All recordings should be this competent. The selection of fine Australian works on the CD is very satisfying. It is worth noting that both of the works by overseas composers, Ourkouzounov and Piazolla, are treated with deep understanding and sympathy by Black and McKay. The driving Bulgarian rhythms, the microtonal inflections, the taut tango rhythms and the searing lyricism are all there.
The Australian works are treated with similar care. Kats-Chernin’s Character Interludes is a collection of idiosyncratic miniatures, a form in which she excels. The contrasting colours and textures of each movement are deftly handled by the performers. There is also a relaxation of the textures built up by the former works by Ourkouzounov and Houghton, which refreshes the ear. They fit very comfortably in the programme between the denser works and provide a steady centrepiece.
A Phillip Houghton guitar piece is always eagerly anticipated- at least by me, but I’ve a feeling I’m not alone! Two Night Movements is fully of glorious colours – the sort of guitar writing that I would expect of Houghton. This work covers probably the widest expressive palette of any of the works on the recording. There are incredibly delicate sounds here which are very sweet to the ear. Again the performers are up to the challenge of the contrasting lyrical and rhythmic sections of the work, and Houghton’s piece, now over 20 years old, sounds fresh and spirited.
Tim Hansen, a composer who has a dual career in music and theatre, re-wrote Earwig for violin and guitar, after it had started life as a guitar and percussion piece. The sounds of tongue clicks, knuckle-taps, and some re-written melodies replace the original percussion. The resulting piece is very satisfying from a dramatic point of view; in particular my ear was drawn to sudden changes of colour and style, and unexpected silences.
This is a CD I’ve been delighted to hear at last. I recommend you take the chance to hear it too.”

“a whirlwind tour through Europe, Argentina and Australia and a really refreshing experience!”

d'aujourd'hui is available as as CD. It can be purchased online through Buywell Music or the Australian Music Centre which both offer secure online ordering.