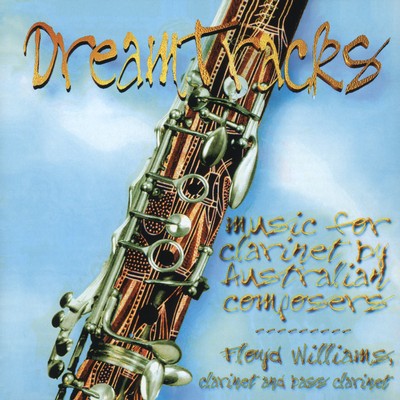 Includes 'Sonata ' (Meta Overman), (Andrew Schultz), the exciting and appealing 'Whirligig' and 'Gorlywhorl ' (Gerald Glynn), 'Twist' and 'bisous' (Gerard Brophy), 'Towards the Still Point' (Peter Rankine) and 'Dreamtracks' (Peter Sculthorpe) - 'may be the best Australian composition for this combination that I have heard.' (Clasax).

“A great addition to any clarinet library!”

“Williams, with his sober but warm style, makes a strong case for music which one virtually never hears on disc, and seldom enough in live performance ... this is an important recording and repays careful attention.”

“The playing throughout the disc is outstanding. The various ensembles perform well together, and Floyd Williams plays with a consistently fluid, beautiful tone and with impeccable accuracy and intonation.”

Towards the Still Point Peter Rankine

Australian composer Gerald Glynn's music has been performed in France, the UK, West Germany and Austria. Actively interested in the music of non-Western Cultures, over the past 15 years he has travelled extensively in Asia, Latin America and Africa, pursuing this interest.

With a background in Celtic music, Peter Rankine's connection to the world of concert music was made in 1980 upon hearing Bartok's Fifth String Quartet. Freelancing since 1987, Rankine has fulfilled commissions for a variety of media including orchestras, chamber ensembles, solo works, theatre, dance and opera, composing for artists locally, interstate and abroad.

Dreamtracks is available as as CD. It can be purchased online through Buywell Music or the Australian Music Centre which both offer secure online ordering.