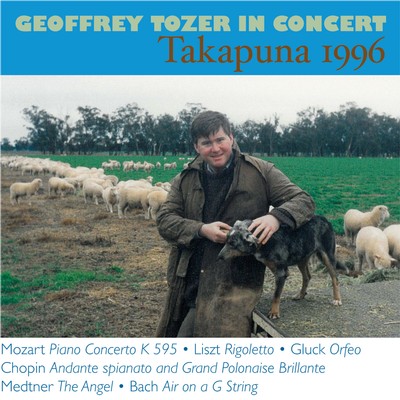 Between 1965 and 1996, Geoffrey Tozer performed twenty-four of the twenty-seven Mozart concertos in public performances in Australia, New Zealand, Japan, England, Singapore and the United States of America.

Tozer regarded the music of Mozart, with that of Bach and Beethoven, as being at the core of his repertoire and, at least until the mid 1980s, was more associated with the music of Mozart that of any other composer. When the great Mozartian Ingrid Haebler visited Melbourne in February 1965, The Age reported that she considered his playing ‘brilliant’. Five years later in London, Tozer made his debut playing Mozart’s Piano Concerto No. 15 in the Royal Albert Hall to enormous acclaim. Later, when Tozer attended Haebler’s concert at the Albert Hall, she complimented in her programme, writing ‘I would have much rather been listening to you’.

In 1980 in Australia, Tozer gave a stupendous performance of Mozart’s Piano Concerto No.16 with the Sydney Symphony Orchestra. The entire performance was filmed and, with Tozer’s performance of Beethoven’s ‘Emperor’ Concerto is an Australian national treasure, one that is still awaiting release 34 years later. Tozer first performed Mozart’s final concerto in the 1970s and he played it frequently throughout his career. He seems to have been especially inspired for the performance in Takapuna, Auckland and probably never surpassed the quality of his performance there on 9 September 1996.

Concerto for Piano and Orchestra in B-flat major, No. 27, K.595 Wolfgang Amadeus Mozart

Artur Schnabel (17 April, 1882 – 15 August, 1951) was an Austrian classical pianist, who also composed and taught. Schnabel was known for his intellectual seriousness as a musician, avoiding pure technical bravura. Among the 20th century's most respected and most important pianists, his playing displayed marked vitality, profundity and spirituality in the Austro-German classics, particularly the works of Beethoven and Schubert. His performances of these compositions have often been hailed as models of interpretative penetration, and his best-known recordings are those of the Beethoven piano sonatas. Harold C. Schonberg referred to Schnabel as "the man who invented Beethoven".

Geoffrey Tozer in Concert: Takapuna 1996 is available for download from the iTunes Music Store.
It's available for streaming through Spotify and Apple Music.

Geoffrey Tozer in Concert: Takapuna 1996 is available as as CD. It can be purchased online through Buywell Music or the Australian Music Centre which both offer secure online ordering.