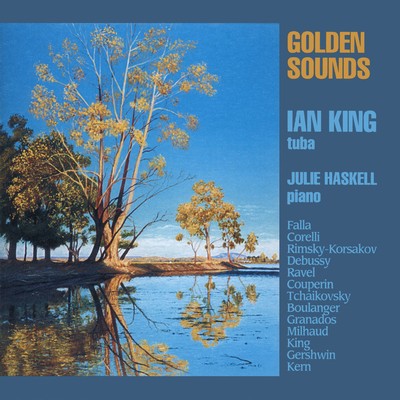 On his first CD for Move, Ian King wowed us with his virtuoso abilities as a young man giving the first tuba recital ever in Wigmore Hall in London. His sequel disc, Tuba Magnifique, older recordings were paired with new recordings made especially in the Move Records studio.

Now at last, a complete new studio CD that shows that after nearly 40 years, Ian King can still conjure up that golden sound! On this recording, Golden Sounds, you'll be enthralled by arrangements of works by de Falla, Corelli, Rimsky-Korsakov, Debussy, Ravel, Gershwin, a movement from Ian King's own tuba concerto and much more.

By the way, the painting on the front cover is also by Ian King. What talent!

Lili Boulanger studied composition with her elder sister, nadia, who was a composer and conductor, and at the Paris Conservatoire. Lili was the first woman to receive the Grand Prix de Rome for music.

Golden Sounds is available as as CD. It can be purchased online through Buywell Music or the Australian Music Centre which both offer secure online ordering.