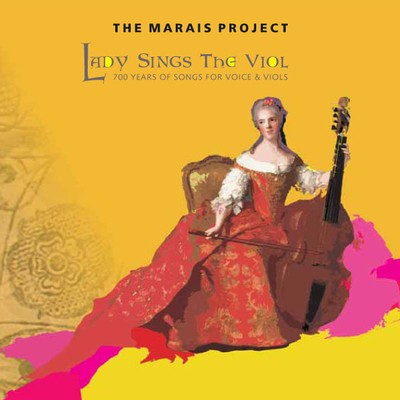 There are also superb arrangements of "She was beautiful" (made famous by Cleo Laine), "Chattanooga Choo Choo" and even a Swedish folk fiddle number. Each song is accompanied by different combinations of viols, violin, lutes, guitars, harp and percussion. Jennifer originally formed The Marais Project in 2000 to perform the complete 600 works of Marin Marais, the famed 17th century French master of the viol. They are currently more than 80% through this unique musical marathon. Along the way she has also pursued a number of innovative side projects with jazz and world musicians.

“This CD is a joy to listen to, challenging notions of suitable repertoire for period instruments - highly recommended!”

“A triumph of arrangement and a showcase of the talents of its participants, Lady Sings the Viol demonstrates what can be achieved if musicians and performers are willing to challenge sterotypes and push the boundaries of their ‘normal’ performance envelope.

An excellent choice for lovers of world music and the quirky, but equally likely to appeal to lovers of fine voices and baroque instruments, singing and playing beautifully.”

Lady Sings the Viol is available as as CD. It can be purchased online through Buywell Music or the Australian Music Centre which both offer secure online ordering.