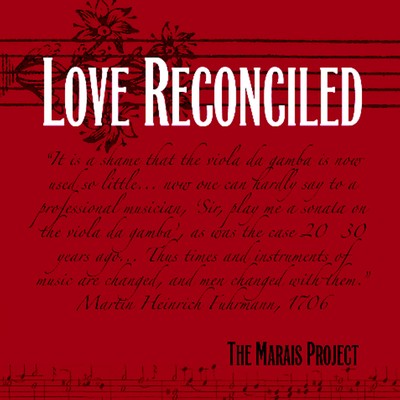 Classical musicians can be notoriously focused and single-minded. Even given this trait, the efforts of Marais Project Director, viola da gambist Jennifer Eriksson in bringing her favourite composer, Marin Marais (1656-1728) before the Australian musical public, is extraordinary. In 2000, completely un-funded, she set herself the task of performing all of Marais' 600 works, collected in five books titled Pièces de viole. Known as the "Paganni of the viola da gamba" (or bass viol), Marais still represents the pinnacle of viol playing. Ten years on with several ABC Classic FM studio recordings and Sunday Live Broadcasts under its collective belt, a thriving annual subscription series and dozens of concerts to its credit, Eriksson's ensemble is further cementing its position as Australia's most dynamic exponents of the French viola da gamba repertoire with the release of its second CD, Love Reconciled on the MOVE label.

Virtually every work on the CD represents an first Australian commercial recording from the monumental Tombeau de Mr. Meliton, the lament Marais wrote for two bass viols upon the death of his friend Meliton, to the Chaconne by Jacques Morel, Marais' suite for two viola da gambas in d minor and, of course, Yates' ballet music. Soprano Belinda Montgomery rounds off the CD with performances of two of Bouteiller's rarely heard motets for two viola da gambas and continuo, in the process contributing another Australian "first".

“For Viol players and Marais enthusiasts, Tombeau de Mr Meliton, reeks of the satisfying richness of two gambas, and the resonance and sonsistency of the theorbo...The Move Package is visually appealing and, the part that matters most, the music selection and listening quality, deserve top marks”

Love Reconciled is available as as CD. It can be purchased online through Buywell Music or the Australian Music Centre which both offer secure online ordering.