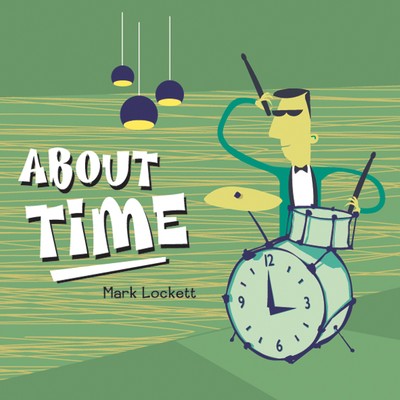 Sidney Bechet, that imperial figure of early jazz, said it best: "Tell a story in your solo," he'd implore his students. Aimless meandering, simply running the chord changes, these weren't for him. Passion, combined with logic and order, equals art, he'd argue. The musicians that drummer Mark Lockett has assembled for this impressive debut CD About Time are all, whether they know it or not, following Bechet's advice to the letter.

Like the band whose music this group so effortlessly evokes, Art Blakey's 'Jazz Messengers', every member is a master story-teller, steeped in the century-old traditions of jazz but always eager to say something new.

And what members we have here: the multi award-winning Jamie Oehlers (tenor saxophone) together with Jordan Murray (trombone), Paul Van Ross (soprano and tenor saxophones), Alison Wedding (vocals), Mark Fitzgibbon (piano) and Nick Heywood (bass). Last but not least is drummer and leader, the New Zealander Mark Lockett. Definitely someone to watch!

“... something that sounds as fresh as if it were written yesterday. Carefully layered and crafted to an almost orchestral perfection ...”

“In releasing an album of modern jazz standards, Mark Lockett and his colleagues have taken on perhaps a more demanding task - tell fresh, new stories within some old and familiar frameworks. As you'll hear, they've succeeded ... admirably.”

About Time is available as as CD. It can be purchased online through Buywell Music or the Australian Music Centre which both offer secure online ordering.