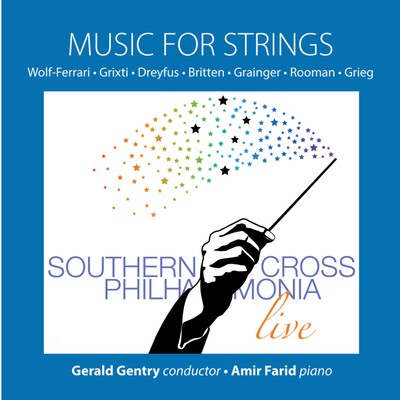 The real value of your contribution is difficult to express in words as it extends beyond anything that any other Australian orchestra is willing to do for Australian composers. Getting the opportunity to listen to your own music is not only an integral part of growing as an artist, but is also at the essence of artistic life. If the music of today is not performed, how can we build on the music of tomorrow? Your support therefore holds an honourable position in our society and should be applauded by all. (Andrián Pertout – composer)

Southern Cross Philharmonia was a fully professional Orchestra. It was established in Melbourne in 2005, a not-for-profit organisation. Its purpose was to champion past and present Australian music within a framework of international repertoire. Its was directed by the late Gerald Gentry.

“Veteran English conductor, Gerald Gentry has been quietly fostering the talents within his Southern Cross Philharmonia, an ensemble largely dedicated to Australian music for string forces. A retired BBC Staff Conductor, Maestro Gentry has much to give these bright and gifted younger artists. A particular warmth and beauty of sound is encouraged: nothing is ever ugly or forced, a vocal quality pervades and as a former violist, this inner line is never very far from Gentryʹs ear. As well, a formidable knowledge developed over a lifetime of 20th century omposers and their work; personages such as Percy Grainger and Ralph Vaughan Williams are introduced as old friends.”

Music for Strings is available as as CD. It can be purchased online through Buywell Music or the Australian Music Centre which both offer secure online ordering.