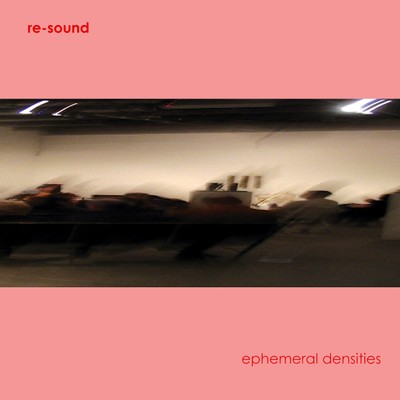 All but one of these works were presented in March 2004 to a capacity audience at Pony, a night club in Melbourne's inner city district. The audience feedback on this performance that re-sound received encouraged the group to create this recording.

canal includes a processed drum pattern created with a drum ensemble, a range of drum samples, simple chord progressions, and samples taken from site recordings in 2003 in Venice and Florence.

Quintet/sextet for chamber group and CD juxtaposes atonal chamber music with recorded materials, including samples of site recordings made in Florence and Venice.

HybriD is a collaborative work for multiple acoustic instruments, live computer processing and synthesis. The merging of performance data derived from each of the performers enables a mix of influences that result in the creation of sounds that are effectively hybrids.

Vectors uses an ordered set of pitches and its variants, and the original set governs the relationship among the different variants.

ephemeral densities explores changes of texture and sound colour. Four sound objects provide the source material for the work: (1) a synthesized sound that resembles the chirping call of the male cricket, (2) a fast changing, busy sound that appeared suddenly and surprisingly as a sonic artefact while undertaking site recordings with a minidisk recorder in Victoria's Grampians, (3) a very low bass sound, and (4) a metallic sounding drum loop.

Ephemeral Densities is available as as CD. It can be purchased online through Buywell Music or the Australian Music Centre which both offer secure online ordering.