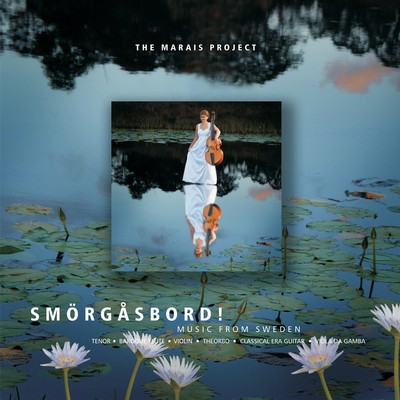 With the release of their 5th CD, “Smörgåsbord” The Marais Project’s 3-year musical exploration of lutenist Tommie Andersson and Director Jenny Eriksson’s Swedish heritage comes to a stunning fruition. Every piece on this beautifully crafted CD is an Australian premiere. The repertoire spans from gorgeously arranged Swedish folk songs and toe tapping fiddle tunes to the wry humour of Carl Michael Bellman (often called the Swedish Schubert), a flute sonata by Swedish baroque master, Johan Helmich Roman, a trio sonata by Marais, a pavane by Swedish jazz super stars, e.s.t, and even a French baroque inspired version of an ABBA song!

The driving force behind this ground breaking recording, Jennifer Eriksson and Tommie Andersson, have been performing together in The Marais Project and many other ensembles for more than 25 years now. Alongside their shared musical loves, they also share a Swedish heritage. Tommie was born and grew up in Sweden, while Jenny’s Swedish grandfather, Knut Axel Eriksson, arrived in Melbourne in the 1920s. He never returned to his homeland. If it was not for a relative from Stockholm who wrote each year to the Australian branch of the Eriksson family, they would have completely lost contact with their Scandinavian forebears.
After many years of discussion, late in 2011 they finally decided to schedule a Swedish concert as part of The Marais Project’s 2012 concert series. Eriksson found it quite emotional at times getting to know the works of Roman and Bellman and some of Sweden’s beautiful folk and other music through the unique lens of period instruments. This repertoire has never been presented in Australia in this format. Although not a comprehensive historical overview of Swedish music it offers a rare glimpse into a musical world virtually unknown outside Scandinavia.
Eriksson and Andersson have assembled a veritable who’s who of Australian period music in bringing together performers of the quality of Melissa Farrow, baroque flute, Fiona Ziegler, baroque violin and Pascal Herington, tenor. Herington deserves special mention for tackling the challenges of Swedish pronunciation as does Tommie Andersson who reveals himself as an arranger of great imagination and sensitivity.
Why an Australian CD of Swedish music? Why not? Art does not have to be sensible. All worthwhile music is a labour of love. Smörgåsbord! is about exploring the contrasts in history, language and culture between Sweden and Australia. It is also about the many life and musical stories that bring people together — even though our respective homelands straddle the deep north and far south of the globe.

“This is the best kind of crossover. Swedish traditional and popular music across centuries and styles – folk, jazz, ABBA(!) – rubbing shoulders with songs and chamber music by composers Johan Helmich Roman and Carl Michael Bellman. The dishes are plentiful, varied and tasty without being overly rich, with just a little French dressing courtesy of Marin Marais. ... impeccably performed and hugely enjoyable musical smörgåsbord.” ★★★★

“SMÖRGÅSBORD! Is an accessible and wide-ranging treat. At all times it remains an expressive and educational aural event. Its packaging includes informative notes and clear translations, with attractive and appropriate photography for the musical atmospheres and material covered.
The longest movement or track is just short of five minutes, giving the recording good momentum. Some of the disc’s well-chosen and dynamically delivered music will instantly repeat in your head, or make you crave a repeat listening. New favourite works and arrangements abound here for us.”

“There is some very charming music on this new CD from the Australian early-music group. This is a well-presented and recorded CD. Particularly beautiful are the arrangements of traditional Swedish folk music and songs. The balance between instruments and sound quality is excellent and the accompanying booklet is attractive and informative.”

Smörgåsbord is available as as CD. It can be purchased online through Buywell Music or the Australian Music Centre which both offer secure online ordering.