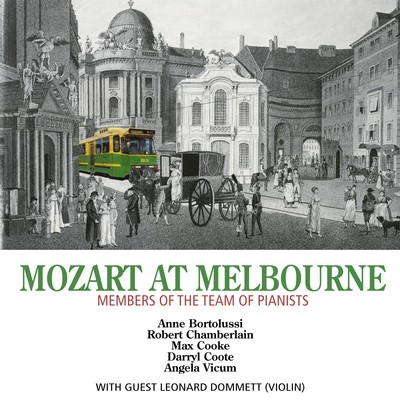 In 1967, pianist Max Cooke, together with ABC concertmaster and violinist Leonard Dommett, gave a series of three recitals in Melbourne presenting twelve Sonatas by Mozart and six by Handel.

"Some of these were subsequently recorded by the W & G record company, now no longer involved in record production. Listening to one of these old LP discs, I realised than even nearly a quarter of a century later, the standards of artistry and sound reproduction compare favourably with modern recordings. In spite of the fact that the original masters could not be located, and rather than allowing these marvellous performances to be lost to today's music lovers, it was decided to remaster these recordings from the best 1967 pressing available. When I put this idea to Max Cooke, he proposed adding interesting keyboard works by Mozart, to make up a complete recording, and at the same time to honour Mozart upon the occasion of the 200th anniversary of his death."
Darryl Coote

Mozart at Melbourne is available as as CD. It can be purchased online through Buywell Music or the Australian Music Centre which both offer secure online ordering.