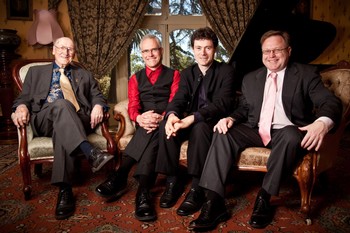 Coupled with unquestioned commitment to the highest artistic performance standards in its many solo and chamber recitals, concerto performances, CDs, and broadcasts, the Team is equally committed to promoting young musicians through its many masterclass programmes in metropolitan and regional areas alike.

The Team has produced nine CDs covering wide range of music including a number of exciting, yet rarely recorded works, as well as two innovative videos and various publications on the art of piano playing and musicianship.

The members of the Team are Artists-In-Residence for the National Trust of Australia (Victoria) at Glenfern, the National Trust's Centre for the Arts and Culture. Here the Team has recently established the Glenfern Piano Institute which has developed innovative programmes including the Spring Piano School for Primary and Secondary school age students, Weekend Retreats for Adult Piano Students, as well as masterclasses by Australian and overseas artists. Professor Max Cooke is Director, with Robert Chamberlain and Darryl Coote as the Partners.

Team of Pianists is featured on the following titles

Sparkling Keys celebrates the successful creative partnership of the National Trust and the Team of Pianists. Over the past decade this has produced the popular winter series Twighlight Chamber music at Rippon Lea, plus concerts at other Trust properties including Como, Labassa, Illawarra and Barwon Park.

A beautiful CD paying homage to the works of Brahms.

Members of Team of Pianists

Robert Chamberlain studied in Melbourne with Max Cooke, in Vienna with David Lutz and Igo Koch, and at the Banff Centre for the Arts, Canada, where he coached with distinguished artists including John Perry, Peter Donohoe, Janos Starker and Lorand Fenyves.