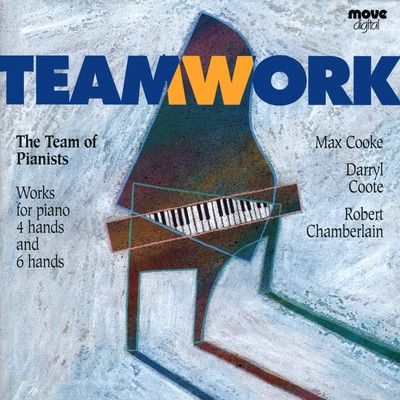 “Move is to be praised for telling us which pianist plays primo, secondo, or terzo. Most recordings fail to do this ... I found the piano sound to be good ... the recorded sound is clean.”

“Pianism of the highest order, stamped with individuality and personality.”

“The pianists Max Cooke, Darryl Coote and Robert Chamberlain are to be congratulated - I have no hesitation in recommending this compact disc to all music enthusiasts”

Robert Stoltz was a composer who wrote an infinite number of unforgettable melodies, but his life which spanned through to the second half of this century placed him a little too late to capture all the glitter of the Viennese ballrooms of the Strauss era.

Teamwork is available as as CD. It can be purchased online through Buywell Music or the Australian Music Centre which both offer secure online ordering.