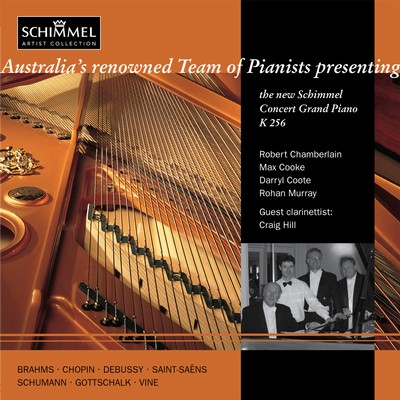 The Team has the honour of this CD being the inaugural recording in Schimmel's Artist Collection series. The Team of Pianists comprises four principal partner-members; Max Cooke OAM, Darryl Coote, Robert Chamberlain and Rohan Murray. As Artists-in-Residence at Glenfern Estate in East St. Kilda, they conduct regular concerts including the summer Rigg Bequest
series Classic Music in Historic Venues during the summer, and the popular series Twilight Chamber Music at Rippon Lea in winter.

The new Schimmel K 256 Concert Grand Piano was shipped to Melbourne in August 2005, where it was unboxed and assembled in the warehouse of Bernies Music Land in Ringwood. This allowed the Team partners to rehearse and become familiar with the instrument's touch and character prior to recording in the studio. Agents for Schimmel pianos is Bernies Music Land, Ringwood, sponsors of the Team of Pianists, who made the production of this CD possible. Following delivery to the studios of Move Records in Eaglemont, the recording sessions took place in October 2005.

The selection of music comprises works for piano duet by Brahms, solos by Chopin, Debussy, Schumann, Gottschalk and Vine, which sit alongside the Saint-Saens' Sonata for clarinet and piano, Opus 167, which features guest clarinettist Craig Hill from the Melbourne Symphony.

Team of Pianists presents the Schimmel K 256 is available for download from the iTunes Music Store.
It's available for streaming through Apple Music.

Team of Pianists presents the Schimmel K 256 is available as as CD. It can be purchased online through Buywell Music or the Australian Music Centre which both offer secure online ordering.