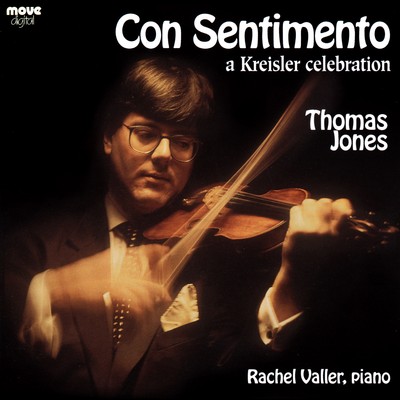 Fritz Kreisler: driving straight to the heart of romanticism

In 'Con Sentimento', Australian violinist Thomas Jones celebrates the pure genius of Viennese composer Fritz Kreisler. These works reflect the breadth and diversity of Kreisler's outstanding ability and style as a composer, arranger, and virtuoso violinist.

A recipient of the Queen Elizabeth II Silver Jubilee Award, Thomas Jones studied with Josef Gingold described as "the best living teacher of violin technique and repertoire in the world today." Gingold was a friend of Kreisler and a student of the great Belgian virtuoso Eugene Ysaÿe, who originated that blend of passionate fervour and lush sensuality that is the very essence of Romanticism. Kreisler inherited this style and infused it with his own inimitable elegance and charm. Under Gingold's guidance Jones has absorbed the legacy of this great romantic tradition.

Kreisler died in 1962 but his life was not without conflict. He was accused by renowned London Times critic Ernest Newman, of perpetuating a fraud on the musical public of the day. It had been assumed (with Kreisler's encouragement) that he had 'unearthed' baroque and classical fragments and based many of his compositions on them. Quite a controversy ensued over these "Classical Manuscripts" which were in fact Kreisler's own compositions.

As well as Kreisler's own compositions and arrangements, 'Con Sentimento' features the premier recording of a new work by gifted Australian-born violinist and composer Wilfred Lehmann. 'In A Night Waltz', written especially for Thomas Jones in 1995, the composer explores Kreisler's romantic style from a modern perspective. Other tracks include: Kreisler's 'Liebesleid (Love's Sorrow)', 'Liebesfreud (Love's Joy)', and superb arrangements of Corelli's La Folia, Gluck's 'Melodie', traditional folk songs, and works by Paganini and Dvorák.

In 1988 Jones became the violinist with the Atlanta Chamber Players, the leading ensemble in the Southeast and toured extensively with them throughout the United States. He has also appeared as guest artist with the Borodin Trio and performed as a soloist with various Australian and American orchestras including the Dekalb Symphony, the Tampa Bay Chamber Orchestra, the Sydney Symphony Orchestra and the Queensland Pops Orchestra.

“The playing shows great finesse and those who love their Kriesler in the Viennese style will enjoy it ...”

“Throughout, Jones and his accompanist Rachel Valler team in perfect harmony and their individual contributions have been ideally balanced with the studio acoustic.”

“... unashamedly romantic music ... Jones gives it the eagerness and sensuality it demands.”

“Thomas Jones gives a distinguished Kreisler celebration. For something a little different yet relaxing, this disc is ideal.”

“Strong performances ... with a sure and confident technique”

Con Sentimento is available as as CD. It can be purchased online through Buywell Music or the Australian Music Centre which both offer secure online ordering.