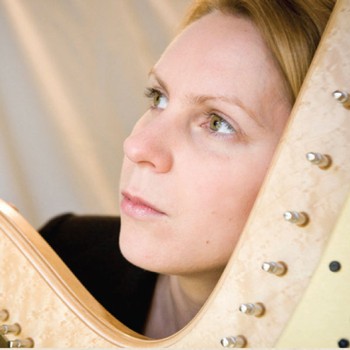 Megan has also completed a Summer Academy course in Salzburg, Austria. Megan has performed with a diverse range of music ensemble, from the Melbourne Symphony and the Australian Philharmonic Orchestra, through to touring with Jose Carreras, the Bolshoi Ballet and Kanye West for the U2 Vertigo tour. Her television appearances include ‘Good Morning Australia’, ‘It Takes Two’, ‘Dancing with the Stars’ and ‘Spicks and Specks’.

She has recorded on the Move and Naxos labels. Megan has performed with Chamber Music Australia for the Melbourne International Festival of the Arts and is a founding member of chamber music group the ‘Miscellany Ensemble’ and duo ‘voxArpa’. Her public speaking skills have seen her in demand as a guest speaker at events around the United Kingdom and Australia, where she has presented a paper at the 5th Australian Harp Festival.

Megan Reeve is featured on the following titles

From classical to folk, from sweeping glissandi to the strikingly contemporary, the range and diversity of the harp always entrances and amazes.

A full CD of compositions by guitarist Michelle Nelson. Michelle is joined on some tracks by harpist Megan Reeve and recorder player Will Hardy.