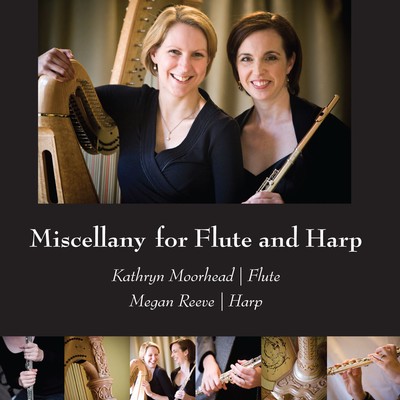 ‘Miscellany for Flute and Harp’ draws on a broad range of historical and contemporary repertoire that showcases this perennial duo. Kathryn Moorhead and Megan Reeve, founders of the Miscellany Ensemble, come together for this long awaited debut recording.

Kathryn and Megan have chosen a wide variety of music to feature on this recording, from the well-known to the recently discovered. Classical favourites such as the Arab Dance from the Nutcracker Suite, Gluck’s Dance of the Blessed Spirits and the Entr’acte from Carmen sit alongside contemporary Australian works from Colin Brumby and John Carmichael. Folk music is explored with variations on Greensleeves and Josef Molnar’s Phantasy on Themes of Japanese Folk Songs, which pushes both instruments to their limits.

A true miscellany for flute and harp!

Miscellany for Flute and Harp is available as as CD. It can be purchased online through Buywell Music or the Australian Music Centre which both offer secure online ordering.