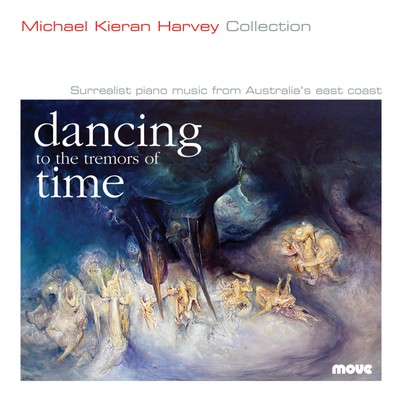 The binding element in all the music on this CD is the concept of surrealism as music. Music is notoriously difficult to pin down in a representational way, but, happily, so is surrealism, as it is more a philosophical strategy than an art movement.

The title work, Dancing to the Tremors of Time, is indeed the title of an Australian painting by Gleeson given this surrealist categorisation, and Colbert creates a metaphorical sonic universe of the image by equating non-sequitur melodic fragments to the disturbingly truncated and deformed figurations of Gleeson’s painting.

Following on from this, the sonatas by McIntyre and Kay, though entirely different in language, but nevertheless like the surrealists in approach, rebel against the establishment by taking opposite stances: one anti-programmatic, and one strenuously representational.

Gyger achieves a quiet grandeur in his use of interweaved minimal cyphers, not unlike the delicate linear narratives of Kandinsky, while Drake and Friedel evoke familiar worlds of sorrow and abandonment similar to those of Hopper’s Diner paintings and Vasarely’s explosive op-art.

Collins, with his stylised jazz idiom, completes the rebellion by fully notating an improvised art into that most archaic and dry musical form, the prelude and fugue, achieving a witty fluidity despite his restrictions reminiscent of Dali’s vagina piano paintings.

“Michael Kieran Harvey is renowned for his formidable technique and championing of contemporary compositions that explore the piano's sonic possibilities. An exciting snapshot of current Australian piano music performed with consummate authority.” ★★★★

Dr Scott McIntyre studied French Horn at the Victorian College of the Arts in orchestral performance and composition from 1988-90, before continuing studies with Brenton Broadstock and graduating with a Bachelor of Music in music composition from the University of Melbourne in 1993.

Australian composer Brendan Collins grew up in the city of Newcastle. He studied trombone and composition at the Sydney Conservatorium of Music with Ron Prussing, Arthur Hubbard and George Golla, whose teaching he found invaluable. In 1984 he won a scholarship to study in Los Angeles with Ralph Sauer, principal trombone of the Los Angeles Philharmonic.

Dancing to the Tremors of Time is available as as CD. It can be purchased online through Buywell Music or the Australian Music Centre which both offer secure online ordering.