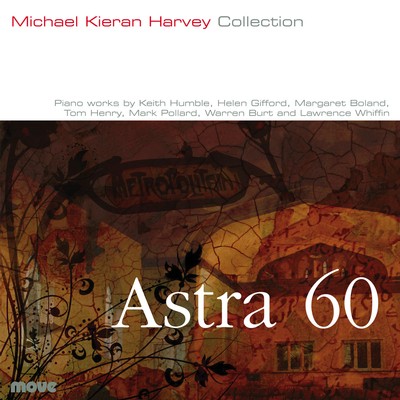 The program notes for the CD are written by John McCaughey, Astra's visionary and inspiring Artistic Director, and describe the connections and influences in this program of piano music especially selected to reflect Astra’s unusual ethos and presentation.

The selection of pieces represent each of the decades since the 1950s with an array of six piano works - including a guard of welcome in this century to Lawrence Whiffin's Piano Sonata No.3 in its first performance, composed for Michael Kieran Harvey in 2010, the composer's eightieth year. The seven composers of the program are linked in a web of musical and personal ties, through their multiple contributions to Astra concerts, their relations to the performer, and their connections with Lawrence Whiffin and with the former Music Department at La Trobe University, where he spent a substantial part of his life as teacher.

At the same time, the works show a spectrum of changing times in the wider musical world. The sonata with its discursive tradition is heard in three different guises, as a frame around other approaches to sound and form in the other three pieces -the piano as vehicle for individual or aphoristic utterances, or for more continuous, monolithic energies.

“Melbourne’s Astra Chamber Music Society has for many years provided a cultural enclave for musical modernism, and this recording of Australian piano works is no different. All the compositions on this CD can be described as non-tonal or post-tonal, though some have fleeting moments of traditional Western harmony or even passages of free-tonal writing. Michael Kieran Harvey performs these pieces with his flawless competence and genuine love for Australian composition. The warmth and expressive range of Harvey’s playing make this a very engaging recording, even for listeners who would normally conceive of this type of music as too abstract… This CD covers six decades of Australian piano music and celebrates the significant contribution both Michael Kieran Harvey and the Astra Chamber Music Society have made. As Michael pointed out in his recent Peggy Glanville-Hicks Address, Australian music deserves to be performed, recorded and broadcast much more often, and this Move release is a decisive step in the right direction.”

Astra 60 is available as as CD. It can be purchased online through Buywell Music or the Australian Music Centre which both offer secure online ordering.