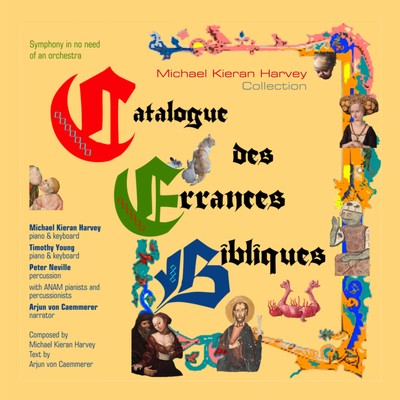 Using the songs of birds from all over France, the composer Olivier Messiaen compiled his Catalogue d'oiseaux (“Catalogue of birds”), a vast compendium of music in seven books. Michael Kieran Harvey, who has recorded Messiaen’s complete work (MD 3299), has composed Catalogue des Errances Bibliques (“Catalogue of Biblical Errancy”), which comprises twenty-five pieces with inspiration drawn from the 850 pages of C. Dennis McKinsey’s monumental Encyclopedia of Biblical Errancy. Interspersed with readings by poet Arjun von Caemmerer, Catalogue des Errances Bibliques is scored for a similarly epic eight keyboards and four percussionists, and treats its subject matter “in the spirit of the musical The Book of Mormon (Parker/Lopez/Stone, 2011)”.

“The inventory of instruments included two grand pianos, four electric keyboards, synthesizers, vibraphone, marimba, a theremin and a range of non-melodic percussion. Narration between each piece consisted of clever, witty and insightful poems written by collaborator Arjun von Caemmerer for each ‘chapter’ accompanying the music. The text is, in keeping with McKinsey, not sceptical of spirituality per se, but rather dogma and the words of sacred texts that can underlie intractable belief systems. Von Caemmerer unpacks these whimsically. One must understand the incredible brainpower of Harvey and von Caemmerer, which when combined, is truly a force to be reckoned with. Indeed after what could only be described as an electrically charged performance, I spoke with a fellow composer in the audience with a ‘How on earth?’ inquiry to which she replied, ‘Mandy, we are mere mortals’. If one is only aware of Michael Kieran Harvey as a performer, then to say his virtuosity translates into intricately composed and technically demanding compositions, provides but a glimpse of his composing prowess. The level of synchrony required of all performers on stage was breathtakingly audacious and utterly masterful. The thought the composer injects into every piece and the articulation of those thoughts musically is really quite astounding. But together, Harvey and von Caemmerer’s vision is uplifting and fun in its irreverence.”

“The spoken narrative is satirical: very irreverent, and at times very funny! For example, I particularly liked Bible Story No.5 ‘Walking on Water’ which uses simple maths, and very plausible deductive reasoning (assisted by reference to the website of Bunnings Warehouse) to calculate how big Jesus’ feet must have been in order for him to have successfully walked on water (the answer is: approx. 20cm wide and 80cm long!). The musical interludes alternate with the spoken parts, to some extent commenting on them, so on the CD they are the even-numbered tracks. At first hearing some tracks (e.g., No. 2, No. 24), sound like free jazz – an effect accentuated by the electric keyboards, the drum kit, and the fast tempi. No.20, with its strings of parallel minor seventh chords and unusual time signature (15/8) could almost be a cover of Dave Brubeck. But this music is not improvised. In fact, everything is meticulously notated (the score is available from the Australian Music Centre – also in a version for two pianos). And within the 25 pieces there is a large variety of styles, from the powerful opening using the whole ensemble (recapitulated in the final piece) to the toccata-like No.12 and 16 (with its prominent synth-effects), along with more meditative pieces like the sparse arpeggios and bowed vibraphone notes of No.30, the angular quartal/quintal harmony of No.38, and the thrilling multimetric rhythms of No.48.”

“Michael Kieran Harvey and Arjun von Caemmerer’s shared conversations must be a blast, this album, a superb example of their continued artistic collaboration. The unity between players, given the incredible complexity of the music, was astounding, and the sound combinations, including tubular bells, mallet percussion and theremin, drumkit, keyboards and double dose grand pianos, was intoxicating.”

Catalogue des Errances Bibliques is available for download from the iTunes Music Store.
It's available for streaming through Spotify and Apple Music.

Catalogue des Errances Bibliques is available as as CD. It can be purchased online through Buywell Music or the Australian Music Centre which both offer secure online ordering.