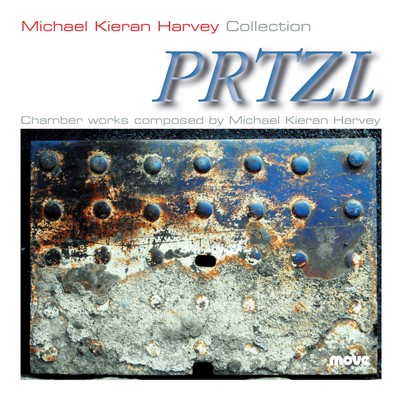 This 2-CD set includes solo piano pieces, music for two and three pianos, works for piano with clarinet, violin, viola and cello – plus Toccata DNA for piano with flute and an amazing collection of percussion.

Michael Kieran Harvey pushes the boundaries of intellect and composition further than he has ever pushed before! In a satirical take on composition, PRTZL addresses some of the most pressing current trends and issues of our time, including politics, government, philosophy, mythology, society, culture and the environment.

There are a lot of big words, big ideas and big notes in here. Just to get started consider the concepts of Hegemony, Aporia, The Locrians, Gestalt and Prime Numbers. If art is always open to interpretation, Michael Kieran Harvey has prepared a canvas layered in a multitude of shapes, sizes and colours.

Profound philosophical ideas metamorphose into virtuoso musical works via the labyrinthine his pretzel-like mind. The piano is wrenched out of its accustomed home, the stately drawing room, to take on philosophical ideas of antifascists, Socrates, a Duchess of Braunschweig, sociologist Max Weber, and a notorious Hobart head-butter.

Translating these ideas to music, Harvey uses the obscure Locrian Mode, reverts to contacting the piano’s strings with flesh rather than being mediated via the keyboard, has pitch material slowly evolving like DNA, and bases his pitch material on the names of his philosophical and music heroes.

“PRTZL is a highly innovative exploration of people, socio-political issues and histories that occupy the wondrously fertile mind, and draw upon the musical insight and agility, of Michael Kieran Harvey. Harvey pours incredible energy, his trademark virtuosity, musical insight, intelligence and passion into everything he touches. Indeed Harvey playing Harvey really is something very special.”

“As a composer, Harvey is well-represented in the Move catalogue, sometimes juxtaposing his own works with those of other Australian writers. On this CD, however, it’s all Harvey – compositions and performances – playing both solo and alongside some new- and long-time collaborators. Module Fugue, impresses for its rapid-fire elaboration ... the piece is full of excitement across its breadth. Toccata DNA – originally for piano, and soon after appearing in this trio format is a triumph for all involved, a marvel of synchronicity and a startling internal transition from a simplicity that is almost tonal to detonations of agility from each sound source – which, in Peter Neville’s case, is quite a few. Aporia II makes for a clever conclusion to this album. It’s the most ‘adventurous’ piece in the collection, reliant more than any other on the creativity of each performer.”

PRTZL is available as as CD. It can be purchased online through Buywell Music or the Australian Music Centre which both offer secure online ordering.